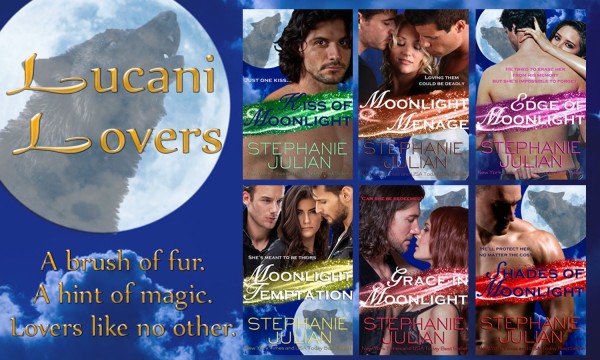 When I dreamed up the idea for the Lucani Lovers, I started with the thought that I wanted to do a series about werewolves simply because they’ve always fascinated me.

I also knew I wanted to set my stories in my Etruscan Magic world. I already had the mythology laid out for my Darkly Enchanted and Magical Seduction series.

My wolves weren’t cursed. Their ancestors were gifted their ability by the Moon Goddess to help them battle their enemies centuries ago. They later became a secret part of the Roman Legion, the special forces unit. My wolves still run their society on the basis of the Legion and they even have a king.

They have mates but they’re not determined by fate. (Although the Goddess of Fate can be a bit of a bitch.) My wolves fall in love just like the rest of us. Although they tend to have a few more…issues than regular people.

Their enemies, the Malandante, are evil. (Well, almost all of them.) They used to enslave the lucani. That didn’t exactly endear the Mal to the wolves.

The “outside” world doesn’t know about the lucani and the Etruscans. And those that do are part of a very select group.

And now you know. Welcome to the group!

There are six books in the Lucani Lovers series and all are priced at 99 cents until Feb. 15.

Plagued by nightmares. Stalked by kidnappers. Tamra McMillan needs a safe haven. When tattooed bad-ass Kyle Rossini steps into her life, the last thing she expects to find is a sanctuary from her demons in his arms. Etruscan werewolf Kyle is the king’s assassin with a killer’s instincts. The last thing he needs is a mate who could be placed in danger because of him. Until he meets the one woman who needs him more than he needs his solitude.

For years, Tira Belludi has longed to give herself to the two shifter men who hold her heart. But visions of death and fears for her sanity have forced her to keep her distance. Nic Rocca and Duke Ducati are brothers in every way but blood. They share a home, a job and had planned to share their life with Tira between them…until the night she saw their future and built a fortress around her heart. Now danger and death stalk Nic and Duke. And Tira must make a choice—grab love while she has the chance, or watch Nic die from afar and lose Duke forever.

Evie Simmons has magical powers she can’t control, she’s living in a house that isn’t hers, and her best friend is a seventeen-year-old werewolf. It’d be hilarious if it weren’t just so damn depressing. Add in the sexy shifter she can’t keep out of her mind and his hot-as-hell friend and it’s a recipe for disaster. Dr. Dane Dimitriou knows Evie is having a hard time adjusting to her new life as part of the Etruscan magical community—almost as difficult as his denial of his feelings for her have been. And he’s got the perfect cure—his best friend, Ryan Maguire. Easygoing Ryan is the complete opposite of stick-up-his-ass Dane. He can act as a buffer. Dane can get close, but not too close. Yeah, good luck with that.

As the werewolf king’s seasoned tracker, Kaisie Giliati hunts his prey with single-minded focus and never loses his quarry. He’s honed his skills for decades but the nature of his job has made for a lonely life. Only his daughter has ever had a claim on his heart. Until he meets the one woman he should never want. Grace Bellasario has done some awful things in her life…all for the safety of her children. But now she has a target on her back and she’s in love for the first time in her life. With a man who should hate her.

Race Aragon knows Mara Marrucini is meant to be his. And he’s not about to let anyone or anything get in his way of protecting her and her baby. As a soldier in the shifter king’s army, he knows exactly how to make her safe. Mara has been betrayed by men all her life and trust isn’t easy for her. Race is the first man to make her feel like a woman. His touch ignites her desire but she fears for his safety. Her presence in his life puts him in the crosshairs. But with her son’s life on the line, Mara trusts no one but Race to keep them alive. 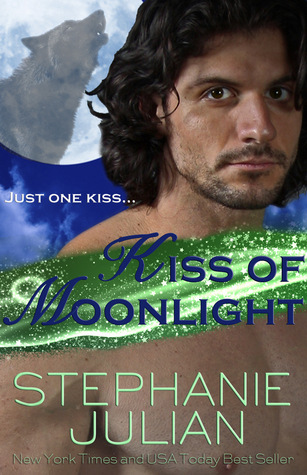 Even though twilight had fallen, she could still see him plainly in the light of the full moon. Moonlight suited him. It softened his hard edges. She wanted to run her hands along that shadowed jaw and across that broad chest, sink her fingers into his hair.

Still standing by his chair on the other side of the table, he walked around to her, holding out his hand.

Without thought, she reached for him, watching his lips curl into a devastating smile as he drew her to her feet. Only inches separated them, inches she wanted to close.

They stood like that for what had to be a full minute, staring into each other’s eyes like they were starring in a Lifetime TV movie.

It should’ve embarrassed her. Or at the very least, made her self-conscious. At worst, she should be running in fear in the opposite direction.

It emboldened her to know she wasn’t scared at all.

Instead, she leaned a little closer, drawn by the warmth of his eyes, the heat of his body.

As if he’d heard her thoughts, his smile faded and desire turned to sharp, biting hunger in her gut.

Then he blinked and began to pull back, shaking his head. “Tam…”

Fevered compulsion made her curve her hand around the back of his neck as she rose on her tiptoes. She shouldn’t have been able to reach his mouth, the top of her head barely reached his shoulder. But he met her halfway, his short groan cut off when their lips met. He pressed hard, his lips firm and hot on hers, his arms wrapping around her back and plastering her to his body.

She moaned, wanting more, but he immediately eased his hold, ratcheted back some of the passion she sensed in his kiss and let her take the lead. Let her press against him. As if he was afraid of scaring her.

But that wasn’t what she wanted. She wanted him to kiss her. Really kiss her until she lost herself in him. Buried old, horrible memories under an avalanche of lust.

So she forced him closer, wrapped her arms around his shoulders and kissed him harder.

Letting her tongue lick at the seam of his lips, she teased until he opened his mouth. She would’ve thrust inside but he beat her to it, finally starting to loosen his hold on his leashed desire.

His hands flattened on her back, each finger a hot brand through her thin t-shirt. The tips pressed into her back for several seconds before easing up to rest there lightly.

She loves hard rock and Broadway, runs very slowly, married a Springsteen fanatic and is the mother of two hairy beasts she calls sons.