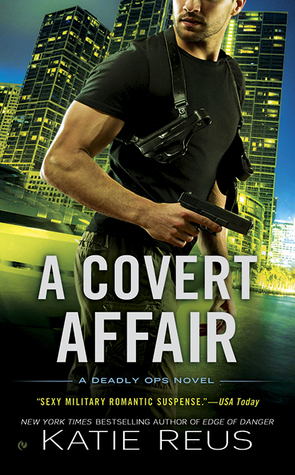 A Covert Affair is the fifth offering in the Deadly Ops series.  This romantic suspense series follows ultra-secretive NSA operatives as they combat evil (both domestic and foreign) while finding their soulmates along the way.  Gikany and Una overall liked the story of Nathan and Amelia.

In this installment we follow Nathan, an operative who was wounded in the previous novel.  He has recovered and is returning to duty on a mission that reconnects him to his lost love, Amelia.  When they were young, Amelia broke Nathan’s heart and it seems neither of their hearts has recovered.  Nathan wants to know why Amelia ended things so they can have a fresh start.  Amelia is afraid once Nathan knows the truth, she will lose him forever.  Further complicating the rekindling of their romance, Amelia is connected to a suspect and Nathan’s boss wants to use her to gain information about him.  Although Amelia is a civilian, she is tough, smart, determined and capable of handling this subterfuge.  However, there is more at play than it seems and someone has Amelia in their deadly sights.

We truly enjoyed Amelia and Nathan’s journey.  Their previous connection gave a foundation and depth to the sizzling attraction we experienced.  Although the reason for Amelia’s abrupt dissolution of her relationship with Nathan was easily figured out, Nathan’s reaction was not.  We liked that what Amelia feared would be an unforgivable offense was neither trivialized nor overly played.  Both showed maturity, though they did lack some open and honest communication, and being privy to their individual thoughts gave credence to their reactions.  Their story is what kept Gikany and Una glued to the page.

The story about the missing women, however, was not quite to our liking.  This was partially due to how the plot line played out, but mostly because the motivation behind the missing women was depraved and creepy.  Without giving anything away, it seemed the antagonists did not thoroughly grasp the ramifications of their nefarious plot.  It would have made more sense to have preserved more of the victims, thus keeping their operation better hidden.  The mastermind behind the operation was surprising, however.  Although it is well foreshadowed, it was easy to dismiss this character.

Although it is not clear whom the next book will focus on, we look forward to reading the next suspenseful installment in the Deadly Ops series.  If you enjoy your romance with action and suspense with a political/military twist, check out this series.  You need not read them in order, although it is much more enjoyable.

After being wounded in action, NSA agent Nathan Ortiz comes home to Miami, eager to return to duty. But he doesn’t expect his newest mission to lead him straight to the one woman he loved, lost, and has never gotten over.

A beautiful, successful restaurateur, Amelia Rios enjoys giving back to her community, especially to struggling women. Then a woman she recently hired stops showing up for work, and, unfortunately, she isn’t the first to go missing.

Soon Amelia finds herself thrust into a shadowy, dark world, working side by side with Nathan, the only man she’s ever loved. They must confront old feelings as they battle a ruthless enemy preying on the poor and weak. The heat simmering between Nathan and Amelia could mean a second chance for them—but first they have to survive.

6 responses to “Review: A Covert Affair by Katie Reus”