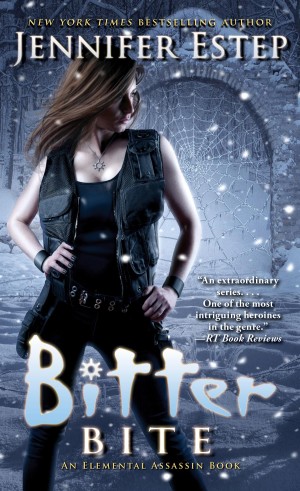 Note: this review contains spoilers from the end of the previous book, Spider’s Trap.

Finding out that her foster brother, Finn’s mother is alive after believing she was dead his whole life, Gin debates on how to best share the news with Finn. However, mommy-dearest doesn’t stay away from Ashland for long, and soon Gin must figure out what Deirdre is up to before she destroys Finn in the process of her latest scheme. Yet, maybe for once, Gin’s suspicions aren’t well-founded, and Finn will finally have the mother he’s longed for his entire life. Nah… Gin’s always right, isn’t she?

Bitter Bite is the fourteenth title in the always exciting Elemental Assassin series. The books blend action and adventure with smart plot development and amazing storytelling, to give readers a thrilling ride. I honestly love each book, and Bitter Bite is on par with its companion stories. However, reading it was so stressful: in my head, I knew everything *should* work out in the end, but while reading, I was worried what the cost would be to Gin – physically, mentally, emotionally.  Ms. Estep keeps her stories fresh and entertaining, even though each book tends to have a few repetitive qualities. What I love is that in Bitter Bite, Ms. Estep actually brings up Gin’s predictability in a clever, round about way. And I sincerely hope it gives Gin pause in the future as she contends with a new big bad, introduced at the end of the book.

I will admit that about one-third of the way thought the book, I started having doubts as I witnessed Finn ignore Gin’s concerns over his mother suddenly appearing back in Ashland. I thought to myself, not again – we’ve been through this before, most recently with Owen. But once again, Ms. Estep takes something obvious and puts a unique spin on the story. I loved that she addresses my concerns via a wonderful scene involving Owen and Finn, and later in the story, when Finn and Gin have a heart-to-heart. Similarly, what could have been a repeat of a robbery scene from a previous book was taken to a whole new level in Bitter Bite.

What I love most about this series, and what made Bitter Bite all the more (better), is watching Gin grow and mature over the course of fourteen titles. It’s amazing to think that this represents less than two years of her life, yet she changes with each adventure. I love that Gin has come to trust and rely on her family and friends. She still wants to protect each one of them, but she knows she can do more with their help and guidance. Additionally, she is learning to share some of the emotional baggage that comes with being the Spider.

In the end, Bitter Bite is another wonderful tale from the life of Gin Blanco, aka the Spider. Ms. Estep continues to keep the series fresh and exciting, weaving both adventure and emotional content into a masterful story.

Which is stronger: blood ties or a battle-tested friendship? That’s the question Gin Blanco asks when a friend’s long-lost relative strolls into town. The suspicious reunion is a surprise for everyone—and a big problem for Gin. Book fourteen in the New York Times bestselling urban fantasy series RT Book Reviews calls “unbeatable entertainment!”

It’s not easy being queen bee of an underworld abuzz with crooks and killers. Wielding my potent Ice and Stone elemental magic will only get me so far—my real secret is my tight-knit makeshift family, a motley crew of cops and criminals, dwarves and playboys. My foster brother Finnegan Lane is my right-hand man, but when his suddenly not-dead relative comes back into the picture, I’m the one on the outside looking in.

It’s funny how life works: one minute your best friend is rock-steady, and the next he’s doe-eyed and buying into this whole loving-relative routine to the point of ignoring you. I’d like to be happy for Finn, I really would. But all of my instincts are telling me that beneath the syrupy sweet demeanor and old-fashioned charm, this sudden interloper is planning something. The whole shtick leaves a bitter taste in my mouth. This person might have avoided the grave once, but I’ll put anyone who hurts Finn in the ground—for good.

I opened my mouth to tell them to stop being idiots, but Don kept on talking.

“Enough chit-chat. It’s freezing out here, and we need to get work, which means that your time is up. But since you found that box for us, I’ll offer you a deal. Turn around, and I’ll whack you upside the back of the head.” Don swung his shovel in a vicious arc. “You won’t even know what hit you. I’ll even plant you in that grave, so you get some kind of proper burial.”

I palmed the silverstone knife hidden up my right sleeve and flashed it at them. “As charming as your offer is, I’m going to have to decline.”

“That’s how it always is with me.”

The two dwarves looked at each other, then raised their shovels and charged at me. I reached for my Stone magic, hardening my body again, then surged forward to meet them.

I sidestepped Ethel and sliced my knife across Don’s chest, but he was wearing so many puffy layers that it was like cutting into a marshmallow. I slashed through his down vest, and tiny white feathers exploded in my face, momentarily blinding me and making me sneeze. Don yelped in surprise and staggered back. I sneezed again and went after him—

A shovel slammed into my shoulder, spinning me around. But since I was still holding on to my Stone magic, the shovel bounced off my body instead of cracking all the bones in my arm.

I blinked away the last of the feathers to find Ethel glaring at me again.

“Look at that gray glow to her eyes,” she huffed. “She’s a Stone elemental. We’ll have to beat her to death to put her down for good.”

Don brightened, his blue eyes twinkling in his face and adding to the Santa Claus illusion. “Why, it’ll be just like our honeymoon all over again,” he crooned. “Remember robbing that cemetery up in Cloudburst Falls, hon?”

The couple smiled at each other for a moment before coming at me again. Well, at least they still did things together.

GIVEAWAY #1: Enter to win a paperback copy of Bitter Bite, compliments of the publisher. To enter, fill out the first Rafflecopter and leave a comment sharing your favorite character from the Elemental Assassin series. If you haven’t read the books, share one of your favorite UF characters.

Winner(s) chosen at random from all eligible entries. This contest is open to U.S. and Canadian mailing addresses only, where not prohibited by law. Open to participants, 18 years or older, who are legally allowed to participate in such a contest as allowed by their local laws. All federal, state, local, and municipal laws and regulations apply. Void where prohibited. No purchase necessary. By participating in the contest, participants agree to be bound by the decisions of the contest sponsor. Prize will be delivered by the publisher. This blog, its reviewers, and the owner are not responsible for items lost in the mail. By entering this giveaway, participants agree to abide by these terms.

GIVEAWAY #2: There is a tour-wide giveaway for a complete set of the Elemental Assassin series, a $25 Amazon gift card, and 3 signed copies of BITTER BITE. Series & gift card are open to US/Canada; signed copies are US only. This contest is sponsored and administered by the publisher.

If you have troubles with the Rafflecopter forms please email me at twimom227 at gmail dot com.

Jennifer Estep is a New York Times and USA Today bestselling author prowling the streets of her imagination in search of her next fantasy idea.

Jennifer writes the Elemental Assassin urban fantasy series for Pocket Books. Bitter Bite, the 14th book in the series, will be released on Feb. 23.