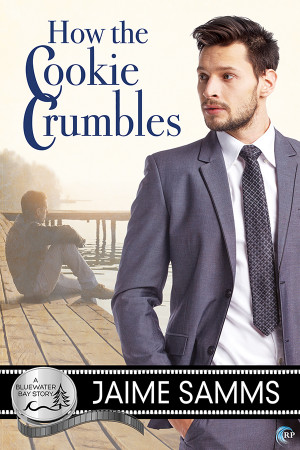 How the Cookie Crumbles
Author: Jaime Samms
Reviewer: B.
Rating: A-

Having survived an adolescence filled with loss and uncertainty, Frederick Jackson thought he’d seen his share of heartache. But, being betrayed by the man he’d grown to care for—along with getting cheated out of a well-earned win on a popular cooking show—proved him wrong. Running away to build his dream in the small town of Bluewater Bay seemed like a great idea. At least, until his past not only catches up with him, but moves in across the street.

Blaire Caruthers might have been raised by a domineering, unscrupulous father, but now all he wants to do is escape the man’s control and right the wrongs of the past. Of course, winning back the man he sold out for a flashy diversion and higher ratings is at the top of his list. But, no matter how deeply he regrets the harm he’s caused, Blaire learns that trust broken isn’t easily restored, and that some battles simply aren’t his to fight, much less win.

Not surprisingly, I found Frederick to be the easier of the two main characters to like. He’s a survivor, and he inspires a fierce loyalty in those who know and love him. He’s also thoughtful, compassionate, shy, determined—nearly perfect as sympathetic characters go. Far from being predictable or two-dimensional, however, Frederick is also fighting a very personal demon of his own, the nature of which the author allows to build gradually, until I felt like I could truly appreciate the scope of what Frederick is constantly battling.

Blaire, on the other hand, I absolutely loathed by the second chapter. His shared history with Frederick ensured my opinion of him as the “bad guy,” an impression that took quite some time to reverse. He has no excuses, but, to his credit, Blaire doesn’t really try to make any. He wants another chance, even though he knows he doesn’t deserve it. Still, if it’s possible to earn forgiveness, then he does about as well as anyone in his situation could. Though he makes mistakes, he comes through for Frederick when he needs him most, which went a long way towards winning me back over. In the end, I couldn’t help but wish that everything would work out for Blaire as much as Frederick.

The Bluewater Bay series has provided some wonderfully memorable characters, and this addition is no exception. I’m always excited when an author gives the other characters in a story as much substance as the main protagonists, letting them stand out, rather than restricting them to the equivalent of a cardboard prop. In How the Cookie Crumbles, Ms. Samms accomplishes this extremely well, imbuing both secondary and minor characters with vivid personalities and distinct voices that made each one a unique, yet necessary, part of the story. Alicia and Jim (who was introduced in The Burnt Toast B&B) are my favorites, without question, but I was almost equally taken with Lee, Ken, Brittany, and many of the others, too.

Another admirable facet of How the Cookie Crumbles is Ms. Samms’ treatment of addiction, which can be a highly personalized weight to carry. In Frederick’s case, it is also both stealthy and fluid, and, therefore, even more dangerous. A more complicated element of his addiction that I was glad to see addressed is the concept of help—his need of it, the absence of it, and the difference between an obligation and assistance which is freely given in the spirit of friendship and goodwill.

With the addition of How the Cookie Crumbles, I was again reminded why this series is one of my favorites. Frederick and Blaire are both an intriguing mix of uncertainty and fortitude, and I appreciated the end of their story even more for how hard-fought it was. As is the case with all of the Bluewater Bay stories, How the Cookie Crumbles stands on its own just fine, but I strongly recommend reading the entire series. Ms. Samms has created some truly memorable characters, and I very much hope to see them again in the future.

After losing a rigged cooking show competition—and a potential lover—to another baker, Frederic Jackson packs up his considerable baggage and moves to Bluewater Bay. He uses the network’s hush money to buy a new bakery where he hopes the small town’s revitalized economy will let him start anew.

Blaire Caruthers never wanted to work for his father at Caruthers Industries. He should have known that fixing the company’s show results was a mistake, and that choosing another man over kind, generous Frederic was an even bigger one. But the damage is done. To escape the fallout, he’s gone to Bluewater Bay to oversee the company’s interest in Wolf’s Landing merchandise.

Stuck in a small, nowhere town doing a job he hates, Blaire wants nothing more than to prove to Frederic he’s changed. However, Frederic struggles to trust the man who betrayed him once already. As Blaire loses ground with his father, and Frederic starts falling back into self-destructive habits, they both have to find the balance and control that’s been missing from their lives.

Jaime has been writing for various publishers since the fall of 2008, although she’s been writing for herself far longer. Often asked, “Why men? What’s so fascinating about writing stories about men falling in love?”, she’s never come up with a clear answer.  Just that these are the stories that she loves to read, so it seemed to make sense if she was going to write, they would also be the stories she wrote.

These days, you can find plenty of free reading on her website. She also writes for Freya’s Bower, Jupiter Gardens, and Total E-Bound, Dreamspinner Press, MLR Press, and Riptide Publishing.

Spare time, when it can be found rolled into a ball at the back of the dryer or cavorting with the dust bunnies in the corners, she’s probably spending crocheting, drawing, gardening (weather permitting, of course, since she is Canadian!), or watching movies. She has a day job, as well, which she loves, and two kids, but thankfully, also a wonderful husband who shoulders more than his fair share of household and child-care responsibilities.

She graduated some time ago from college with a fine arts diploma, and a major in textile arts, which basically qualifies her to draw pictures and create things with string and fabric. One always needs an official slip of paper to fall back on after all. . .

Leave a comment for a chance to win $20 in Riptide credit. Entries close at midnight, Eastern time, on February 20, 2016. Contest is NOT restricted to U.S. Entries. Thanks for following the tour, and don’t forget to leave your contact info! This giveaway is sponsored by the publisher. Open to participants who are legally allowed to participate in such a contest as allowed by their local laws. All federal, state, local, and municipal laws and regulations apply. Void where prohibited. No purchase necessary. By participating in the contest, participants agree to be bound by the decisions of the contest sponsor. Prize will be delivered by the contest sponsor. This blog, its reviewers, and the owner are not responsible for items lost in the mail. By entering this giveaway, participants agree to abide by these terms.

7 responses to “Review + Giveaway: How the Cookie Crumbles by Jaime Samms”