Posted February 2, 2016 by B. in Paranormal Romance, Rating B, Reviews Tags: Bs-review, Heart of the Wolf series, Sourcebooks, Terry Spear 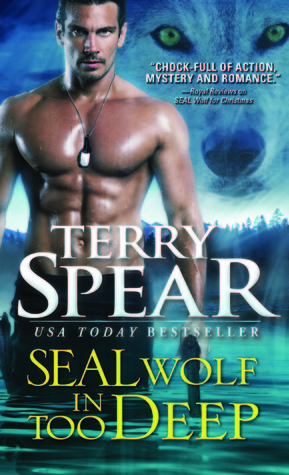 SEAL Wolf In Too Deep
Author: Terry Spear
Reviewer: B.
Rating: B+

Allan Rappaport knows the importance of rules. As part of a close-knit wolf pack, he learned early on the need to keep their kind a secret from humans that would hunt them down and destroy them. Being a Navy SEAL taught him how to get the job done in the face danger and keep his cool under pressure. But, nothing could have prepared him for the beautiful, spirited woman he can’t stop thinking about.

Leaving her troubled upbringing behind, Debbie Renaud found happiness and purpose as a diver for the police department in her small, northern Montana town. And, after her last breakup, she’d convinced herself that the job was enough. At least, until she was partnered with a sexy, warm-hearted SEAL who fascinates her on every level. They would make a perfect team—if only he didn’t have so many secrets.

Although I’ve said it before, I can’t help but enjoy the strong women Ms. Spear continues to create for this series. Debbie is tough, determined, compassionate, and too clever for the pack’s (or her) own good. Between her quick thinking, her skills as both a diver and investigator, as well as Allan’s understandable inability to resist her, I liked her very much. Debbie is extremely swoony over Allan, but no more so than he is for her, and, by halfway through the narrative, I couldn’t imagine them with anyone but each other.

Allan is likewise reminiscent of many of the alpha males in this series, though his role in SEAL Wolf in Too Deep was certainly an enjoyable one. He is highly skilled, completely devoted to his pack, and endearingly thoughtful. He also has all the control in the world in every other aspect of his life, but when his heart gets in the way, he’s a fairly glorious mess. Which, of course, just made him even more attractive.

To Ms. Spears’ credit, she gives equal consideration to both main characters when it comes to the frustrating, awkward, pratfall-plagued nature of their own inadvisable attraction. In fact, Allan’s inability to hold Debbie at arm’s length has far greater consequences, due to the secrets he’s obliged to keep. By turns, Debbie’s plausible anger with Allan crumbles as quickly as her determination to resist him, making the outcome of the story pleasantly inevitable.

Yet another characteristic of the Heart of the Wolf books that I always look forward to is the suspenseful side of the narrative against which the romance always plays out. This time, the entire pack might be a target, and the many layers of the story take a good while to unfold. There were several twists in SEAL Wolf in Too Deep that caught me by surprise, actually, making this addition to the series all the more compelling.

Though many series of this scope run their course long before now, the Heart of the Wolf novels continue to be among those that I enjoy a great deal. SEAL Wolf in Too Deep could easily have fallen into the trap of being overly formulaic, but managed to keep me on my toes just fine. Despite the numbers, I found Debbie and Allan to be as sweet as they are funny and intriguing, and I loved seeing them make their way to one another against the odds. As big as the series has become, Ms. Spear always manages to keep these stories interesting, making the prospect of more tales about these remarkable characters something to look forward to.

His love is dangerous
As a Navy SEAL and police diver, alpha wolf shifter Allan Rappaport knows how to handle tough situations, but the arrival of a human diving partner-especially one as attractive as Debbie Renaud-is a whole new challenge. Getting involved is dangerous, but Debbie’s offers are hard to resist. As the heat between them rises and a murder plot thickens, Allan is on the brink of exposing his biggest secret.

But she’s diving in headfirst
For Debbie, working with another top-notch diver like Allan is too good to be true, and their mutual attraction is hotter than she could have dreamed. Debbie suspects he’s hiding something, though, and she’s set on figuring it out-one off-duty rendezvous at a time. But when Debbie gets between a werewolf hunter and his intended victim, suddenly she is plunged straight into the heart of Allan’s world-a world she never knew existed.

Purchase Info:
SEAL Wolf In Too Deep (Heart of the Wolf #18)

3 responses to “Review: SEAL Wolf In Too Deep by Terry Spear”