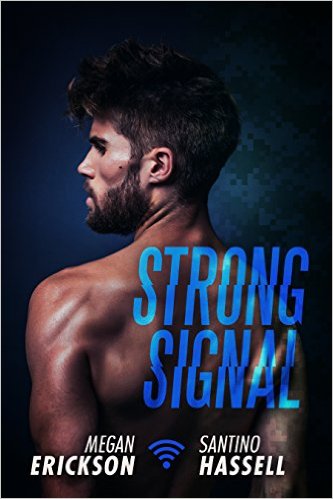 Garrett Reid has a long way to go until the end of his latest—and last—deployment. All he wants to do is to put in his hours working on the vehicles at the base and log some time on his favorite MMORPG. But, the untimely demise of his character at the hands of a ringer leads him on a quest for payback that turns into something entirely unexpected.

Gamer extraordinaire Kai Bannon is mostly happy in his carefully constructed world. He’s got a highly successful Twitch stream, a steady income from several gaming companies, and a loyal following that provides him with plenty of backup whenever the creeps come out to play. But when a surly Army mechanic reaches out from halfway around the globe, Kai can’t help but want more of what the man is offering. It would be perfect if the idea of venturing beyond the walls of his apartment didn’t leave him shaking in a cold sweat.

I had been itching to get my hands on this story since the moment it was teased online a couple of months ago, and I’m very happy to say it was better than I imagined it would be. Strong Signal absolutely nails the intricacies of online relationships, and wonderfully validates the potential to form genuine connections with others that would never be possible in the “real world.” As someone who has made several of my most meaningful friendships via the internet, I couldn’t agree more.

In this first offering from what is sure to be an exceptionally relatable and compelling series, Ms. Erickson and Mr. Hassell tackle a lot of simple truths about the bonds that are sometimes formed on the internet, and do so in a matter-of-fact way that made perfect sense to me. The emotions themselves might be complicated, but the fact that they manifest legitimately is not. Though it certainly isn’t a flawless system, the boundless essence of the internet offers Kai and Garrett more opportunities to explore their own natures in ways that simply aren’t possible where an abundance of physical proximity extinguishes the desire or ability to do so. Fairly early in the story, Garrett says:

“But things were different via email. The words just came out.”

I found both Garrett and Kai to be frustrating, entertaining, and enormously likable characters. They are so different in many ways, and yet they understand each other on a level that defies easy explanation. I can’t think of a better foundation for their relationship than that. I was increasingly pleased that they continued to be okay even when it appeared that everything would fall apart any minute. Neither ever seemed to be able to explain why this was the case. One of my favorite passages was when Garrett stops to ponder:

“…in the billions of people on this shitty planet that I’d never be able to meet in person, the Internet had handed me one person who seemed to be absolutely perfect for me?”

Strong Signal is a great story for anyone who is not only a fan of romance, but is also sick to death of hearing that the connections they’ve forged online aren’t real. Kai and Garrett are perfect for each other in so many improbable ways that seeing their relationship evolve was an undeniable pleasure. As someone with an aversion to certain social situations myself, I feel that Kai’s social anxiety was handled especially well. Ms. Erickson and Mr. Hassell have created two characters that I absolutely adore, who were able to find love in a space where living a lie or being lonely aren’t the only options. In a more general sense, Strong Signal made me think that, maybe the beauty of the internet is that, as the world gets bigger, it’s simply a little easier to be less alone.

I was counting down the months until the end of my deployment. My days were spent working on military vehicles, and I spent my nights playing video games that would distract me until I could leave Staff Sergeant Garrett Reid behind.

That was when I met him: Kai Bannon, a fellow gamer with a famous stream channel.

I never expected to become fixated on someone who’d initially been a rival. And I’d never expected someone who oozed charm to notice me—a guy known for his brutal honesty and scowl. I hadn’t planned for our online friendship to turn into something that kept me up at night—hours of chatting evolving into filthy webcam sessions.

But it did. And now I can’t stop thinking about him. In my mind, our real life meeting is perfect. We kiss, we fall into bed, and it’s love at first sight.

Except, like most things in my life, it doesn’t go as planned.