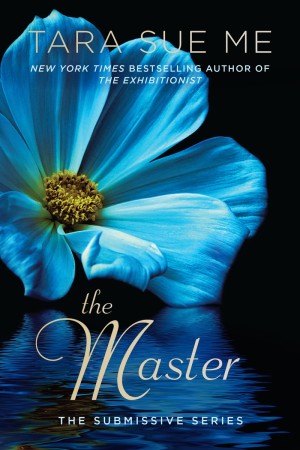 The Master
Author: Tara Sue Me
Reviewer: VampBard
Rating: A

I’m a big fan of Tara Sue Me’s Submissive series. While I may not have raved about every single title, they all have a special place in my heart because each book has some poignant lesson I can apply to my own life. The Master is no exception.

While many people read for specific purposes (predominantly, to escape reality), a single title can fill several roles. It’s always fun to immerse myself in some well-crafted characters and a substantial plot. But the books that make me think and reflect on my own life are those I’ll keep on the back-burner for a good ol’ fashioned comfort read when life just gets too overwhelming. The Master is going on that list.

Readers of the Submissive series have already met Sasha and Cole, our main characters for this title. As Sasha’s plot line wove through previous books, I was really curious as to how she would get her HEA. Stop. Rewind. If you *haven’t* read the previous books, The Master could be read as a stand-alone. However, I think there’s deeper meaning and understanding as a reader with the more in-depth background information supplied in previous titles of the series. The author does a great job of ‘reminders’ throughout the book, but it’s surely no substitute for actually reading the prior six novels. For readers of the series, and actually, the blurb, Sasha is re-entering the BDSM world after a play session with her Dom went horrifically of-the-rails. She is re-joining the Partners-in-Play BDSM group, and she requires retraining in order to overcome the abuse she sustained. She needs to learn to trust herself again, while playing, after such a traumatic experience. Here, the parallels with life overwhelmed me, to be honest. So many people are involved in either physically or emotionally abusive relationships—it made my heart hurt just thinking about it. How do those people manage to find the yin to their yang? Someone that simply *gets* them, even if they’re really broken? That’s today’s society, unfortunately. Everyone has baggage, and seeing Sasha’s baggage laid before us, the readers, drove home exactly how fortunate I am to have Mr. VampBard. As we watch Sasha go through her ‘process’, it gave me hope. Hope that someday, I’ll be able to put behind me the rest of the baggage I brought into my marriage. Hope that other people—still in horrendous situations—will have the opportunity to read this book and be empowered to make a change. To find their voice. And, above all else, to let their voice be heard. Sasha is a submissive. And while we read about how submissives have all the power in a D/s relationship, it is beautifully illustrated in The Master.

Cole isn’t living a life full of sunshine and roses, either. We read previously in the Submissive series that he split from his girlfriend/slave of eight years. He wasn’t as significant in previous titles as Sasha was, so I didn’t have a feel for him before reading. Cole’s got his own set of luggage, though. Since the story is told from alternating past tense POV, we get to hear what’s going on in Sasha AND Cole’s heads. And… oh myyyyy, the things going through that boy’s mind. *fans self* One of the biggest things for me was Cole’s speech pattern. He’s a Brit, and I can actually hear his voice in my head. And reading about how Sasha hears it? What it does to her? Check out his snippet from the 2% mark:

He spoke it like a caress. Soft and gentle and tender, but with an underlying strength that couldn’t be denied and with sensual promises woven in every vowel sound. She had an overwhelming desire to hear him say it again.

Cole wasn’t just a super sexy voice, though. The way he put her needs above his own. I was… um… speechless. Drawn in. Totally reminded of exactly why Mr. VampBard is perfect for me.

There was one other thing I thought was super cool in The Master, though. Cole talked about how they train people to identify counterfeit money. They only give them legit bills for a certain period of time. Then, they should be able to pick out the impostor bills by merely touch. The parallel he drew? Blew. My. Mind. This parallel made so many things click for me. I even talked about it with Mr. VampBard.

I may be a little intense about The Master. I may have been accused of growling at a cat that tried to sit in my lap, disrupting the reading mojo. Ready to read something pretty fantastic and relatable? Yeah. Me too. And Tara Sue Me’s The Master is it.

Cole knows that Sasha is not the kind of submissive he needs. He wants someone who will serve him 24-7, not a part-time partner. Still, the further they go into their play, the more Cole begins to wish he could make Sasha his all the time…

When forbidden desires turn into scorching action, Sasha and Cole come face-to-face with their demons—and realize their scorching relationship might be too dangerous to last…