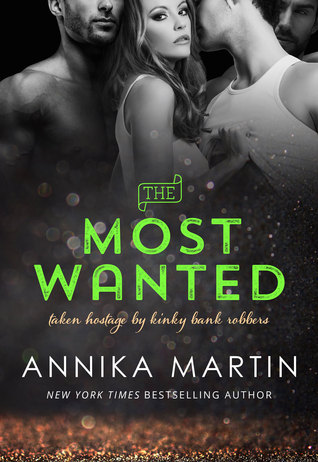 Picking up shortly after the conclusion of the previous story, the God Pack is still living at their lair in Los Angeles and have decided to start a private investigator service, giving their lives a little bit of normalcy. However, this isn’t a regular PI firm as they cater to their fellow criminals. Their first client, Diego, wants the gang to prove that he didn’t steal his future father-in-law’s prized Corvette, taking it on a joy ride and crashing it. The more involved the gang becomes in the case, the more danger they face from an old enemy.

The Most Wanted is an excellent addition to one of my recently discovered favorite series, the Kinky Bank Robbers, which follows the same group of lovers from book to book as they live an outrageous lifestyle. While the off-center humor and sexy scenes are what originally drew me to the books, Ms. Martin continues to develop the individual characters and group as a whole, putting them into emotionally difficult situations that allow them to grow. The Most Wanted finds the foursome at odds with each other, which bothers Isis a lot. As the newest member (and only female) of the God Pack, she worries that this undercurrent of aggression and discontent will break apart her newly-found family. Following the gang on their journey to the other side of their troubles gave this book a bit of a distinctive feel from the first three.

But despite the darker emotional edge, Ms. Martin continues to bring the humor, causing me to laugh out loud more than a few times. I could easily site a couple dozen scenes and lines, but here is one of my favorites:

“Poor Odin always tried so hard to tone down his beautiful male model looks and go for a gruff badass appearance, and it never worked. He could glue a dead tarantula to his nose, and even then, people would be like, why does that super-hot guy have a dead tarantula glued to his nose?”

The Most Wanted brings more to the table that just a silly bank-robbing romp. This one had the same humor as the previous titles, yet there was a darker emotional component. These bandits have been together as a foursome for a while now, so a deeper connection is warranted, yet I didn’t expect this level of emotional strife and depth from a series that has been mostly outrageous and goofy. In the end, I completely adore the God Pack and look forward to where life takes them next.

Between robbing banks and making Isis obey their wickedly dirty commands, the kinky bank robbers seem to have it all. Or do they?

The gang’s desire for a normal life leads them to start an actual business—a detective agency. But when a drug kingpin hires them to solve a baffling mystery, the gang is driven deep into the Los Angeles underworld—and comes face to face with a dangerous enemy.

And the mystery isn’t the only thing unraveling—a sexy and forbidden new game is tearing the gang apart. Can they pull back together before it’s too late? Or is the world’s sexiest four-way doomed to destruction?

6 responses to “Review: The Most Wanted by Annika Martin”