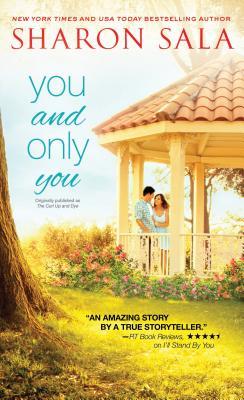 You and Only You
Author: Sharon Sala
Reviewer: Nima
Rating: B-

You and Only You was originally published as the stand-alone book, Curl Up and Dye, released in February 2014. It appears that Sala is going forward with this as the first book in her new Blessings, Georgia series, named after the small town where her characters call home.  Unfortunately after a weak opening paragraph, the story really doesn’t get much better.  It is filled with clichés, repetition, and caricatures.

LilyAnn Bronte lost her high school sweetheart and then lost herself. Everyone around her treats her like a child and this goes on for y-e-a-r-s. In all that time, no one, including her parents, seems to push her into adulthood.  In the name of compassion, she’s allowed to wallow, let herself go, and drift through her life. Meanwhile, her next door neighbor, Mike Dalton, has been pining for her since the 10th grade.  He does pull off sympathetic, but sometimes crosses over into the stalker zone as he skirts LilyAnn’s world without ever making his case.  There just isn’t a lot of character depth with LilyAnn, Mike, or any of the other townsfolk.

It reads sweet.  It’s not a hot and steamy novel although there is some sex in passing.  There is also a rape which felt too harsh for the overall tone of the book.  Either it’s edgy or it’s not. Trying to be both doesn’t really come off well.

The overall story isn’t bad.  It has potential which I hope will be realized with some more depth in future books, but this one was just “okay.”

Mike Dalton has secretly loved LilyAnn Bronte since they were all children together in the small town of Blessings, Georgia. But one fateful day T.J. Lachlan roars into town and starts showering LilyAnn with his charm, and Mike feels his dream of them being more than friends slipping away.

LilyAnn, as anyone in Blessings will tell you, let herself go after her fiancée was killed in Iraq. The attention of the handsome new guy shocks her into a revelation: she’s ready to live again, and maybe the best is yet to come. The thing is, everybody in Blessings is sure it’s Mike and LilyAnn who belong together-and they’re willing to do whatever it takes to make LilyAnn realize the love of her life has been by her side all along.

Purchase Info:
You and Only You (Blessings, Georgia #1)

2 responses to “Review: You and Only You by Sharon Sala”