Craveheart: The Forbidden Tale of the Loch Ness Monster 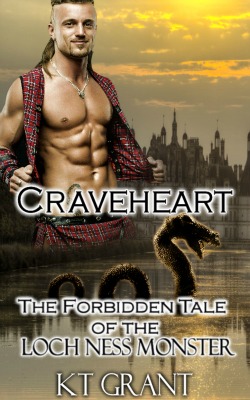 Upon reaching a bend in the path, the trees and foliage broke apart to show a large body of water in front of her. She stopped at the shoreline, enthralled. It was the Loch Ness! Here the fog wasn’t as thick, and the moon above shimmered on top of the water. Looking left and then right, the vast lake went on for miles. She flexed her toes in the dirt, catching sight of a wooden dock jetting a quarter way out. It would be perfect for her to sit on and splash her feet in the water or dive into and float so she could stare up at the sky and view the stars above.

A sense of peace came over her as she studied this beautiful liquid landscape. Her ancestors must have bathed and swam in these very waters! Now, she would do the same.

She inched forward to let the water lap at her feet. Not too chilly. It was almost like a bath. She stepped in deeper and the water came up to her thighs. So nice against her skin.

Scanning the area, she searched for any humans, or other animals who might witness her here. Other than the moon, there was no other light to reveal her hiding space. It was also very quiet, perhaps too quiet. Come to think of it, she hadn’t heard any birds or insects making noise since coming this way. Shrugging it off before her overactive imagination took over, she walked over to the dock and walked on the wooden boards to the edge, where she stopped and looked into the murky depths. It was pitch black. She couldn’t say how deep it was, but it should only be a few feet.

Scanning the area one last time, she drew off her dress and pulled down her thong, leaving them in a heap next to her heels. Another giggle escaped her as she opened her arms and sighed. A slight breeze coasted along her body, making her nipples tighten and the curls guarding her kitty cat flutter. Soon, her whole body would be wet from her dip in the loch.

“Here goes, nothing!” she said and, holding her breath, dove in.

Once she hit the water, she swam to the top and waded. It felt fantastic! The loch was like a warm blanket. It also didn’t taste salty or grimy. She dove under again until she panted from the exertion and then floated on her back. She spread open her arms and legs for balance and closed her eyes.

“This was the best decision I made,” she whispered, and dipped down until she was submerged.

When she came to the surface again, the fog that had vanished now reappeared with a more greenish tint to it. Also, the breeze picked up, coasting around her head and through her hair. She opened her eyes, sensing she was no longer alone.

“Hello?” she still called out.

She flinched, swearing she heard her name. She stilled her swimming, listening for any strange sounds. When it was quiet again, she decided to move closer to the shoreline.

She had just started to swim in that direction but froze when something hard brushed the inside of her thigh. She squeaked and kicked out at it. Suddenly, something slick and bumpy, curled around her inner thigh, pinching the skin near her pu**y.

“What the hell is going on?” She slapped at the mysterious object that had taken hold of her other leg.

The voice now spoke in her head instead of near her ear. She splashed around, trying to break free, but then her arms were pulled away from her body. As she fell into the water, something smooth and solid moved under her ass, keeping her stationary.

Panic set in. She whimpered as another smooth and slick object rubbed her ass. She closed her eyes, wishing this was all a bad dream. When something tugged on her hair hard, she opened her eyes and gasped. In front of her, a water spray of flashing rainbow colors rose above. She was suddenly drowsy and could only blink in a daze as the rainbow hues fell over her, making her body tingle.