CARNAL, the 4th story in the sexy Overwatch series from Sasha White. Following Primal (book 3), Carnal continues Adam and Oliva’s story. Today we have a sneak peek excerpt from Carnal. 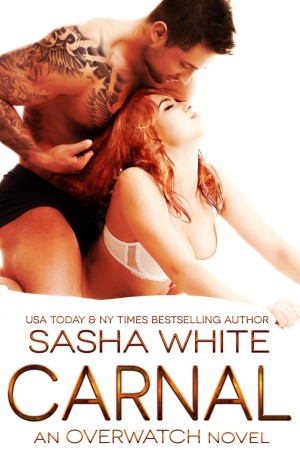 She watched Bruce and his sub, John, leave the bar and head over toward one of the play areas. The one with the spanking bench that looked sort of like a wooden sawhorse with nice cushy padding over it. As they walked, John’s steps slowed until he was lagging behind. Bruce turned, grabbed his sub by the arm and jerked him to his side. Olivia’s inner radar sprang to life and she leaned forward, watching the couple intently.

When they got to the play area Bruce let John go and went to set his toy bag on the floor by the wall. He pulled out a pair of cuffs and turned to find John on the other side of the bench, watching him with a smirk. Bruce said something and John shook his head. A frown creased his rugged face, and Bruce was Bruiser again as he stalked toward his stubborn sub.

Olivia glanced over to where Chris, one of the security guys stood with Eden, the club manager. Their relaxed stances as Bruiser wrestled with John, forcing him into position over the bench told Olivia that this was part of a planned scene. Heat started to unfurl low in Olivia’s belly and her pulse kicked up as she watched Bruiser wrestle John’s jeans off him before pushing him back down onto the bench. A crowd was forming around their play area, and someone shifted, blocking Olivia’s view. She slid off her seat and turned away only to run into the rock hard chest of the man who’d been standing behind her.

She clapped a hand to her chest. “Adam! When did you get here? I mean, here, behind me, not here at the club, because, well, I know you’ve been here for a couple hours already.” Good Lord, what was wrong with her? She never rambled!

Adam’s lips lifted in a small smile as his warm hands slid around her waist. “I’ve been standing there since just after Bruce pulled the cuffs out of his bag, you were just to entranced to notice.”

“Oh.” She slid her hands up over his ribs to settle over his chest. She loved the feel of his heartbeat against the palm of her hand. “Well, I’ve noticed now, Sir.”

“What’s turning you on more, Beauty?” He leaned down and scrapped his teeth across her jawbone before nipping at her ear. “The role play with Bruce and John, or the memory of our own wrestling match over that bench?”

A couple of months ago when she’d found Adam installing a new set of chains in the club, she’d made a some smart ass comment that had turned into a game of catch me if you can through the closed club. He’d caught her near that bench and bent her over it, smacked her ass hard several times, then flipped up her skirt and ripped off her panties before she could catch her breath. When he’d thrust into her from behind and proceeded to f**k her brains out she’d come so hard she’d almost blacked out.

She never used to think like that when it came to men and sex. Her best friend Jazmin used to laugh because Olivia had a hard time saying words like f**k and c*ck and p*ssy. Now, she might not say them out loud to anyone except Adam, but they were always there in her mind now. Especially when thinking about Adam.

They made love quite often, but sometimes it was only f**king. There was no other way to describe it.

“Memories,” she said with a little shiver. “Definitely memories.”

They met by chance when he saved her from a violent attack. Now it’s her turn to save him…from himself.

Adam Kessler is a deeply private man, but to keep the woman he was falling in love with from walking away, he bared his past to her. Opening up to Olivia kept her in his life, and now they’re both dealing with the aftershocks.

To celebrate the upcoming release of Carnal, Sasha is giving away one (1) digital set of the first three Overwatch titles to one (1) lucky commenter. To enter, leave a comment sharing with us one of your favorite sexy reads. Be sure to include a way to contact you, should you win (email or non-private twitter info). Contest is open until 12:00 AM (midnight) EDT on March 21, 2016. Winner(s) chosen at random from all eligible entries. This contest is open internationally where not prohibited by law. Open to participants, 18 years or older, who are legally allowed to participate in such a contest as allowed by their local laws. All federal, state, local, and municipal laws and regulations apply. Void where prohibited. No purchase necessary. By participating in the contest, participants agree to be bound by the decisions of the contest sponsor. Prize will be delivered by the author. This blog, its reviewers, and the owner are not responsible for items lost in the mail. By entering this giveaway, participants agree to abide by these terms.