Amanda J. Greene is here today, celebrating the release of the Rulers of Darkness Box Set.

I’d like to start out thanking That’s What I’m Talking About for allowing me to take over one of their posts. This is one of my favorite blogs and I’m honored to be here today. So, let’s jump right in!

10 Things Reader’s Might be Surprised to Know about Me

1. One of my favorite movies of all time is the Godfather Part I. I watch it every time it’s on and love it so much so that I walked down the aisle to the Godfather Love Son rather than the traditional Bridal March. Also, when my husband and I were introduced as Mr.  & Mrs. for the first time, the DJ played the Godfather Trilogy’s theme song. Hey, I’m Italian – it fits.

2. Flame and the Flower by Kathleen E. Woodiwiss was the first true romance novel I ever read. It was one of my grandmother’s favorite romances that she allowed me to borrow. This historical is written in the true bodice ripper fashion and was originally published it 1972.

3. My love of vampires started in middle school when I read my first Y/A paranormal novel but Dark Gold by Christine Feehan was the first adult paranormal romance I ever read and I was hooked.  Goodreads: http://www.goodreads.com/book/show/108385.Dark_Gold

4. I have a terrible habit of starting series on book 3. Dark Gold is the 3rd installment within the Dark series. I don’t know what it is, but the 3rd book almost never fails to capture my attention and then I have to go back and read books 1 and 2.

5. My husband and I met when we were 10. We were in the same 5th grade class and actually “went out” that year. Lol We went to different middle schools and high schools, but reconnected when he joined the military.

6. We have 2 fur babies: Kelly (cocker spaniel) and Barrette (blackmouth cur mix). We didn’t have either name picked out when we got our pups. To be honest, Kelly was supposed to be a cat. We went out with the intention of bringing home a kitty, but got a puppy instead. Her name came from a car commercial that was playing when we picked her up. Barrette wasn’t planned at all. We saw an adoption event going on and decided to stop by. He is a cute little mutt from Mexico. The organization we adopted him from go to the border cities and help the stray street dogs. My husband named him Barrette after the Barrette 50 Cal riffle.

8. My dream car would be a trophy truck. Yes, I want a rallied out truck. I love off-roading.

9. I wrote my first full length novel when I was 12 – after I met and fell in love with my first vampire hero – which was the first version of Caressed by Moonlight (Rulers of Darkness #1). I wrote the book by hand and kept it in a 3 ring binder. The thing is falling apart but I still have it.

10. I didn’t intend to make Caressed by Moonlight a part of a series, but after I got to know the characters, I had to share all their stories. I’ve recently released the Rulers of Darkness series, books 1 through 3.There will be a total of 6 books and I’m currently working on book #5.

Read 3 sizzling, dark, paranormal romance novels and fall in love with the Rulers of Darkness.

Passion can be lethal… 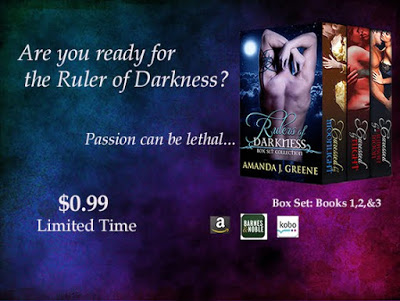 Dorian Vlakhos is no ordinary aristocrat. He is a vampire king, who will do anything to save his clan from complete annihilation, before an ancient curse can claim his immortal life.

Penniless and orphaned, Victoria Kingston has nothing to bring to a marriage, yet she must shackle an unsuspecting gentleman into marriage by the end of the month or forfeit her rights as guardian of her younger sister. With the help of her dearest friend, Victoria begins her hunt, and vows to stay far away from the dark, mysterious, Dorian Vlahos.

After meeting the beautifully innocent Miss Kingston, Dorian had to have her. He would do absolutely anything to make Victoria his. One sweet stolen kiss would bring them together while a force, more powerful than any vampire, would bind them for all eternity, but treachery, war, and death rule Dorian’s dark world and Victoria would be fortunate to survive.

Caressed by Night
Dimitri Arsov, the last remaining pure vampire, was thought to be dead for the past four hundred years. Now, he is back and has a score to settle with the traitor that had tried to kill him centuries ago. But as he waits for his prey to blindly step into his carefully laid trap, his overwhelming hunger for blood is triggered when he saves a beautiful art historian.

Kerstyn Ingmar’s life was normal and straight up boring until the night she is rescued by the dangerously sexy, powerfully mesmerizing, Dimitri. Unable to resist his diamond blue eyes and intense kisses, she is drawn into his world of darkness and closer to her impending doom.

While their desire consumes them, Dimitri is haunted by images of a bloody and deadly future. As his enemies draw near, he must find a way to save his mate from her destiny before fate destroys them both.

Caressed by a Crimson Moon
Consumed by madness and tormented by dark memories of blood and death, Hadrian Lucretius, King of the Validus Clan, has returned after living in self-imposed exile for nearly three hundred and fifty years.

To maintain peace with the vampires, Eva Maldonado is offered as a sacrifice to the crazed vampire king by her father, the alpha of the Silveria Shifter Pack. Hadrian’s reputation is both legendary and lethal; he is ruthless, bloodthirsty, lusty, and soulless. When Eva arrives at the ancient fortress high in the Carpathian Mountains, she is shocked to find a ravaged man with dark burning eyes filled with loneliness and dangerous desire.

Would she be his lover…or his prey? His savior…or his victim? Would Hadrian lure her into madness or would their perilous passion be their redemption? 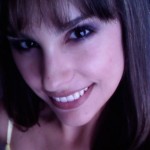 Amanda J. Greene creates paranormal romance for ravenous readers. She lives in Southern California, where she enjoys escaping the rewarding but hectic world of writing by spending time in the sun and sand with her military husband and their two dogs.