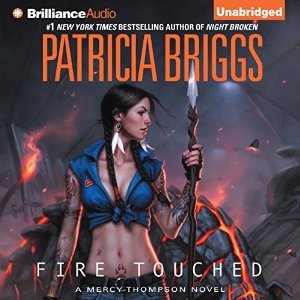 With things between the Fae and the rest of the world straining to a dangerous point, Mercy and Adam find themselves defenders of the Tri-Cities after the Pack kills a nasty troll on national TV. Along with defeating the troll, the pair are reunited with their fae friends, Z and Tad, who bring with them a fire-touched human boy who has been locked in the fae realm for centuries. Now Mercy and Adam must find a way to keep those they love and those under their protection safe from the fae threats.

BAM! Mercy is back! Fire Touched is another amazing story from the creative mind of Patricia Briggs. Chronologically, the book takes place sometime shortly after and briefly refers to the events of Dead Heat (Alpha and Omega #4), and is tied to the larger story arc of fae discontent that has spanned both the Mercy Thompson and Alpha and Omega series for the past few books. It also ties up some of the short-term and long-standing issues with which the pack and/or Mercy has been dealing. Warning – this book is NOT the place to start your journey with this amazing series!

There is so much that I loved and enjoyed about Fire Touched, it’s hard to express exactly what made it so great. I like that Ms. Briggs has brought Mercy and Adam back to solving a mystery that threatens their well-being, while much of the pack drama is laid to rest almost immediately (note: it’s about damn time!). Adam and Mercy’s relationship grew exponentially during the course of the previous book, and their mutual trust is strengthened as a result, making their actions seamless throughout this book.

I think I most appreciate how all the parts work together in this one. Each piece of the story supports the larger whole. Nothing is extraneous and superfluous. The storytelling is amazing, especially when shared by Lorelei King. Additionally, the book moves the entire series forward, while creating interesting changes that will significantly impact future stories. But it’s all done in a way that isn’t showy or brash, which is well-suited to Mercy’s persona. It wasn’t until the book was over that I realized how much was put to rest during the events of Fire Touched.

While I enjoy reading this series nearly as much as listening to it, Lorelei King IS Mercy to me. As soon as I heard that first sentence, I fell into a happy place that felt like home. Ms. King nails everything about Mercy, from her confidence to her uncertainty; from her love for Adam and Jesse to her distrust of those outside her inner circle. She is young yet wise, which all comes through in Ms. King’s performance. But it’s not just Mercy, the cast of characters is huge, and each has his or her own voice, accent, emotional responses, and inflections.

Mercy Thompson has become one of my all-time favorite heroines and series. Fire Touched is one of the best books in the series, bringing together a huge cast and many parts to create an a wonderful story.

My Rating: A
Narration: A+