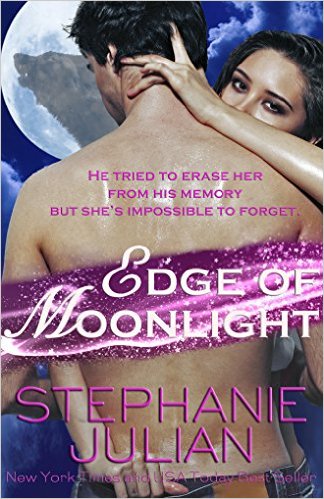 Kaine Giliati is an elite solder shifter. After rescuing the human John Simmons, she realized he was her mate, and she longed to be with him. Yet when John saw Kaine shift and he learned the Lucani secrets, he chose to have his memories wiped so he could walk away. Now Kaine misses him even though nothing ever happened between the pair.

John and his sister, Evangeline, were kidnapped in the last story, and now his memories of how he escaped are fuzzy, and his dreams are haunted by a beautiful woman. When he sees the woman of his dreams in a bar, he thinks he might be crazy, but takes her home anyhow.

Picking up when the previous book left off, Edge of Moonlight continues the story about a mysterious person who has been kidnapping humans with Etruscan blood. The story deepens with the reappearance of Evangeline, who’s slight magical abilities have grown exponentially and out of control. I have been enjoying this story from the beginning, and I was glad to see so much progress on finding out who is behind the kidnappings, as well as the motives. However, I felt the entire story fell flat. The motivation behind the kidnappings was tenuous, and in the end, the perpetrator was equally as weak.

John and Kaine’s romance was fiery hot, and filled with passion. While the pair experienced some of the paranormal insta-love, there were complications and bumps in the road. Unfortunately, much of their trouble could have been avoided with any sort of open communication.

In the end, I enjoyed reading Edge of Moonlight, but I would have liked a more concrete story around the mysterious kidnapper. Kaine and John’s romance was enjoyable, but I wished they’d been a bit more open with one another.

My Rating:  B- Liked It — But I had a few small issues

Etruscan wolf shifter Kaine Giliati has longed for John Simmons since he willingly agreed to wipe all memory of her from his mind. The pain in her heart is only magnified by terror-the ability to call her wolf appears to have deserted her, as well.

For months after he and his sister escaped a crazed kidnapper, John has been dreaming about a beautiful woman he’s never met but who seems so familiar. A woman he’s shocked to find in a dark bar one night. A woman who agrees to come back to his apartment for raw, passionate sex.

4 responses to “Re-release Review: Edge of Moonlight by Stephanie Julian”