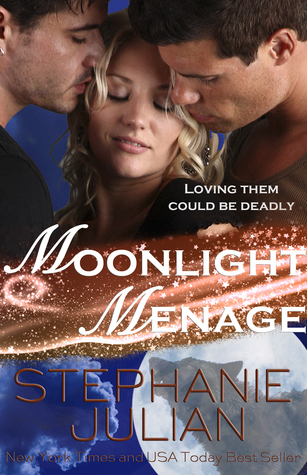 Nic and Duke are brothers in every way except by blood. They work, live, and play together, and they both love Tira deeply.

Scared by a vision she had of Nic’s death the first and only time she attempted to be with Nic and Duke, Tira has isolated herself from the men she loves. Now that Nic’s time appears to be coming to an end, Tira must decide if she wants to continue hiding or take a chance on love.

Nic, Duke, and Tira’s story began in the previous book, Kiss of Moonlight. They share an eight-year history, which gives the story a tight emotional connection from the start. The trio share a bond and unrequited love that has kept each of them unhappy. I really like the back story reasons for their distance.

The overall story of the mysterious kidnappings deepens and builds upon the first book, however some of the storylines mentioned in the first book are absent in Moonlight Menage, which didn’t bother me, but left me wondering if they will pick back up. There is still a lot of unknown and mystery surrounding the overall storyline, and I like how we get bits over the course of each book. Additionally, the author brings in new characters and deepens the mythology.

The smex is hot. There are lots of menage sexy times. The scenes add emotional value to the book.

Overall I liked Moonlight Menage, but there one or two scenes that just felt out of place – added fluff or their purpose not clear, making them feel superfluous. I would have preferred either a deeper connection made between the scenes and the story or have them edited out. I am enjoying this series. It’s a great mix of PNR erotica and a solid, extended storyline that leaves me ready to take on the next book.

For eight years, Etruscan witch Tira Belludi has longed to give herself, body and soul, to the two shifter men who hold her heart. But visions of death and fears for her sanity have forced her to keep her distance.

Nic Rocca and Duke Ducati are brothers in every way but blood and partners who have each other’s backs. They share a home, a job and had planned to share their life with Tira between them . . . until the night she saw their future and built a fortress around her heart.

Now danger and death stalk Nic and Duke. And Tira must make a choice-grab love while she has the chance, or watch Nic die from afar and lose Duke forever.