Hi y’all! I’m Ally Blue. Welcome to my blog tour for my newest book, The Secret of Hunter’s Bog. Thank you for stopping by. Be sure to comment on this post, or any of the posts on the tour, for a chance to win a full set of my Mojo Mysteries series—Demon Dog, A Ghost Most Elusive, and Myth Adventures—in the winner’s choice of electronic format. Read on and enjoy! 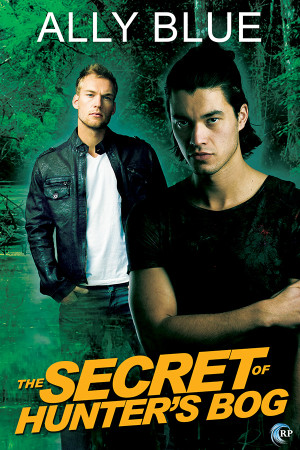 After a fire destroyed their first shop, Koichi McNab never thought he’d meet anyone special when he and his twin sister opened their new store in a strip mall. Thanks to the way his last relationship ended, he certainly never expected to find someone he could really fall for again. But when he discovers that the gorgeous owner of the “glamping” store next door has some secrets of his own, Koichi gets more involved than he ever intended, and realizes that he just might be able to take another chance at love after all.

Raised in affluence, yet isolated and ignored by his family, all Will Hood thought he needed was his father’s approval. When the man he fell in love with vanished without a trace two years ago, Will decided that he’d be better off on his own. But, when an Instagram photo leads him on a chase to the town of Duchene, Alabama, Will finally begins to see that living in the past won’t heal old wounds, and that the love he’s always wanted is closer than he could have imagined.

With a grand total of just over 200 pages, The Secret of Hunter’s Bog is a very busy story. The introduction of more than one mystery, unsolved crimes, an element of suspense, and a healthy dose of romantic entanglement insured that there was plenty going on to keep those pages turning. There were a few places that seemed necessarily abbreviated, and which could be expanded a little more should the opportunity arise, but I think the author did a lot with the space she had.

Although I’ve never been able to fully enjoy the idea of “insta-love” in fiction, I can certainly appreciate a degree of “insta-lust,” and Will and Koichi have plenty of it. Both men are rendered fairly dumbfounded at first, and there are several bouts of stunted chitchat and impure internal monologues to go with it. A sweeter, more all-encompassing kind of attraction quickly follows, however, and I found their mutually awkward flirting to be very endearing.

I also thought that there was a nice balance between the mystery surrounding the fire that burned down the twins’ first store, and the more romantic elements of the story. While it seemed clear early on in the narrative that this event and the questions concerning Will’s former lover would intersect at some point, Ms. Blue kept me fully engaged in the story by allowing a few potential outcomes to remain viable until fairly close to the end.

The Secret of Hunter’s Bog is a sweet, short story with just a hint of spookiness, and a little bit of mystery as well. While the interest brewing between Koichi and Will is evident from the very beginning, there are several rough patches that keep their relationship from being too saccharine. Although there are certainly some elements that could be explored further, for such a concise story, I thought it had a great deal to offer. Overall, The Secret of Hunter’s Bog is a well-written, enjoyable story that was a lot of fun to read.

For Koichi McNab, the shop he and his twin sister Kimmy are opening in Hunter’s Bog Mall is a fresh start after their old one burned down. A way to move on. Especially when he meets the hunky owner of the luxury camping goods store next door. Koichi’s never been an outdoorsy guy, but Will Hood just might change his mind.

Will came to Southern Alabama to establish his own life away from his big, intrusive family—and in hopes of finding Anthony, the lover who vanished two years ago. But meeting Koichi throws everything off-kilter. Anthony was a long time ago. Koichi’s right here, smart and funny and cute, and Will wants him.

As Koichi and Will become friends, then lovers, Will’s past and Koichi’s present tangle into a dangerous knot that brings them face-to-face with secrets, theft, treachery . . . maybe even murder. With their lives on the line, their only way to safety is together.

Ally Blue is acknowledged by the world at large (or at least by her heroes, who tend to suffer a lot) as the Popess of Gay Angst.

She has a great big suggestively-shaped hat and rides in a bullet-proof Plexiglas bubble in Christmas parades. Her harem of manwhores does double duty as bodyguards and inspirational entertainment. Her favorite band is Radiohead, her favorite color is lime green and her favorite way to waste a perfectly good Saturday is to watch all three extended version LOTR movies in a row.

Her ultimate dream is to one day ditch the evil day job and support the family on manlove alone. She is not a hippie or a brain surgeon, no matter what her kids’ friends say.

Leave a comment for a chance to win a full set of Ally’s Mojo Mysteries series—Demon Dog, A Ghost Most Elusive, and Myth Adventures—in the winner’s choice of electronic format. Entries close at midnight, Eastern time, on March 12, 2016. Contest is NOT restricted to U.S. Entries. Thanks for following the tour, and don’t forget to leave your contact info!

4 responses to “Review + Blog Tour: The Secret of Hunter’s Bog by Ally Blue”