Hello, everybody! I’m Marie Sexton, and I’m here today to tell you about my New Adult novel, Trailer Trash. Trailer Trash is a sweet coming-of-age story about two high school seniors: Cody, who’s dirt poor and literally lives on the wrong side of the tracks, and Nate, the preppy new kid in town. It’s set in the fictional town of Warren, Wyoming, in the mid-1980s. It’s full of angst and 80s pop culture references, and I promise, it has a happy ending. 🙂 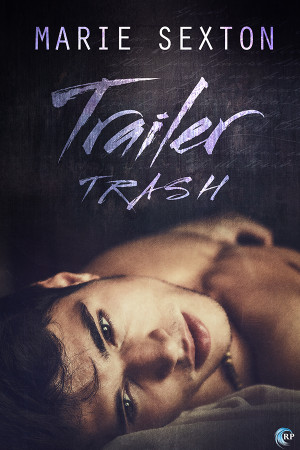 Set in the miserable wasteland that is Warren, Wyoming in 1986, Trailer Trash is the “coming-of-age”/ “coming out” story of two young men who somehow manage to find love despite the world around them trying its best to tear them apart. Aside from the inevitable death of the town itself, the entire narrative is filled with stark descriptions of joblessness and poverty, and the frustration and misplaced blame that comes from struggling against the immovable boundaries of the established financial and social order. All of which makes for compelling, but not frivolous, reading.

Of the two main characters, Nate was definitely “easier” for me to read about. He’s naïve, affluent (by Warren standards, to be sure), resentful, and lonely. Far from being a bad person, though, he’s just hurt and a little shiny. It takes him a while to accept that “the rules” that applied in Austin, Texas, do not apply in his new home… and he gets just about everything wrong. Still, his desire to hang out with the self-described “pariah” of the school, rather than the popular kids he resembles in clothing labels only, made me like him very early in the story.

Cody Lawrence, on the other hand, could never be accused of being shiny. Stripped of any dreams he may have had for himself early and often, he’s already been through too much, seen too much, at the age of seventeen. As the only acknowledged gay student in a small high school full of the most vicious kinds of cliques, he really can’t catch a break. This, combined with his situation at home, makes Cody a genuine outcast. Yet, he has a truly good heart, despite everything, and I adored him.

One of the ways in which I think Trailer Trash excels is in the author’s ability to add vivid details to nearly everything. From the pervasive reek of cigarette smoke and the pleasant scent of freshly-washed hair, to the color of the sky, and, most especially, the cold, each scene had a solid construction that was easy to visualize. This seemed particularly true of the world through Cody’s eyes, and I couldn’t help wanting nothing more than for him to escape his situation.

This story went by very quickly for me, mostly because there’s simply so much going on. Ms. Sexton incorporates a plethora of late-1980’s nostalgia—including early Madonna, cassette tapes (and 8-tracks!), Polo shirts, etc.—then contrasts it all with the explosion of ignorance and paranoia that fueled the panic over the AIDS virus. Additionally, the main characters have to deal with divorce, poverty, and a disturbing amount of small-town bigotry.

One of the most wonderful things about Trailer Trash is that, when it isn’t about abuse, heartbreaking squalor, and despair, it is a story about discovery, hope, and love. Beginning with a promise so perfect Cody can’t even bear to hear it spoken aloud, happiness starts to color the remainder of the novel. Even though Cody doesn’t have much hope of his own, Nate’s determination to find something better generates enough for them to share.

Despite the heavy themes that permeate it, Trailer Trash is still a story of love. The connection that Cody and Nate share is so unlikely that I might have become too skeptical, had the rest of the narrative not made me care about them quite so much. The fight that the two have to go through in order to have something so basic and necessary is infuriating, and I became thoroughly invested from the very first chapter. Though it is dark in places, I couldn’t put this story down, and it’s definitely one I’d like to keep for myself.

It’s 1986, and what should have been the greatest summer of Nate Bradford’s life goes sour when his parents suddenly divorce. Now, instead of spending his senior year in his hometown of Austin, Texas, he’s living with his father in Warren, Wyoming, population 2,833 (and Nate thinks that might be a generous estimate). There’s no swimming pool, no tennis team, no mall—not even any MTV. The entire school’s smaller than his graduating class back home, and in a town where the top teen pastimes are sex and drugs, Nate just doesn’t fit in.

Then Nate meets Cody Lawrence. Cody’s dirt-poor, from a broken family, and definitely lives on the wrong side of the tracks. Nate’s dad says Cody’s bad news. The other kids say he’s trash. But Nate knows Cody’s a good kid who’s been dealt a lousy hand. In fact, he’s beginning to think his feelings for Cody go beyond friendship.

Admitting he might be gay is hard enough, but between small-town prejudices and the growing AIDS epidemic dominating the headlines, a town like Warren, Wyoming, is no place for two young men to fall in love.

Marie Sexton lives in Colorado. She’s a fan of just about anything that involves muscular young men piling on top of each other. In particular, she loves the Denver Broncos and enjoys going to the games with her husband. Her imaginary friends often tag along.

Marie has one daughter, two cats, and one dog, all of whom seem bent on destroying what remains of her sanity. She loves them anyway.

To celebrate, Marie is giving away a $50 gift card to either Amazon or All Romance Ebooks, winner’s choice. Leave a comment to enter the contest. Entries close at midnight, Eastern time, on March 26, 2016. Contest is NOT restricted to U.S. Entries. Thanks for following the tour, and don’t forget to leave your contact info!