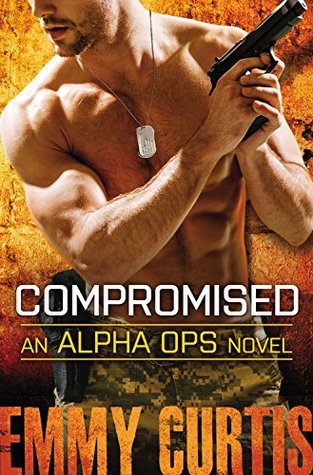 This is my first read of an Emmy Curtis book and Compromised, being #5 in the series, puts me at a disadvantage of any backstory that I may have missed.  That being said, I wish I had some. We come into the story on Sadie Walker and Simon Tennant’s wedding day.  Being new to the series, I don’t know if we had any of the courtship in previous books or any knowledge of what brought these two together.  It was an oddity to me to take the love in a relationship for granted at the beginning of a romance without any of the romance.  Sadie’s father happens to be the director of the C.I.A.  Simon happens to be a Delta Force operative.  Despite this combination, everyone is surprised when the wedding erupts in gunfire, most significantly Sadie.  Really?  While shocking and sad, Sadie can’t deal.  She not only calls off the wedding, she calls off the relationship and sends Simon packing without even discussing it.

In fact, Sadie eliminates Simon from her life completely and spends a year becoming a field operative for the C.I.A.  This is how she up in Athens, Greece, on her first assignment out of training.  Simon also happens to be there on his own assignment.  What follows is lots of angry make-up sex between two people who haven’t even spoken to each other in over a year.  Sadie thinks ill of Simon; Simon assumes the worst about Sadie.  It doesn’t make either of them especially likable.  Furthermore, Simon keeps commenting on how much Sadie has changed since they were together and how much he likes the changes.  Did he really love her before?  I only found myself routing for their reconciliation because they deserved each other.  In not having the love story upfront, their reunion felt like little more than chemistry.  It never felt like there was a real relationship binding them together at a deeper level.

Sadie and Simon’s assignments do overlap in Greece, and I actually wished I had more of the intrigue, more of the covert ops stuff. The book is not an especially long read and I think could have benefitted from some enrichment without losing the pacing.  Overall, I liked it, I just wanted more from it.

It was supposed to be the happiest day of her life. But when her wedding erupts in gunfire, Sadie Walker realizes this is not the life she wants-her fiancé’s work with Delta Force will always cast a shadow over their relationship. After leaving the hard-muscled hero at the altar, she thinks she’ll never see him again . . . until a chance encounter reveals that he still has a strong grip on her heart.

On a covert assignment overseas, Simon Tennant is shocked when he spots Sadie with another man. Jealousy flares, as does an irresistible urge to keep her protected. Amid a dangerous game of international espionage, he’ll have to convince Sadie just how perfect they’ve always been together. This time, nothing will take precedence over winning her back, no matter the cost to his cover-or his life . . .