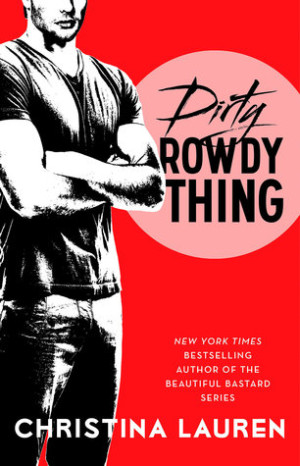 Harlow Vega is having a bad day. After a less than memorable one-night-stand, being awakened by said boy’s mother at 6:00 am, and then running into her ex-husband (of 12 hours), Finn at Starbucks, she finds out her mother has stage 3 breast cancer. Needing to take the edge off her life and forget her troubles, she reengages with Finn for some mind-blowing sex. The problem is, she can’t get Finn, the sexy Canadian fisherman, out of her head.

Finn Roberts thought he knew Harlow, with her rich parents and larger-than-life persona. He didn’t mind being her sexual distraction until he started to know the real Harlow. Now he’s falling for her and doesn’t know what to do.

Dirty Rowdy Thing is intense! I absolutely love Harlow and Finn, both individually and together. They compliment one another so well, and it’s heartbreaking when they both realize it and chose to step back. Neither is ready to deal with the overwhelming emotions that begin to surface as they spend more and more time together, both in the bedroom and out. And WOW! in the bedroom, the pair are smoking hot! Their sex is incredible: hot, naughty, and powerful. Of all the books, I think Dirty Rowdy Thing has the most intense and detailed sex scenes of the series. But it’s not sex just for the sake of sex, regardless of what the pair thinks. The scenes provide windows into the characters’ hearts and souls. They are literally laid bare to the other.

As much as I used to dislike the alternating first person POVs, I am now a fan when it’s done right, and in this series, it is done right. I realized after the fact (and even while reading the first book), that I missed it terribly with Mia and Ansel’s story. I love knowing that the guy is falling as hard as the girl. I love getting his prospective on the relationship and the sex. It makes the book so much more fulfilling.

Another thing I love about this series, and Dirty Rowdy Thing in particular, is how the authors don’t rise to a quick climax (pun intended) and ending. The conflict builds over time, and the characters are given space to think, react, and resolve the issues without feeling rushed. It’s wonderful storytelling. And the romance is made better for it. I am in LOVE with these characters and all they go through. They are crazy but mature. They are fun, but serious. They make mistakes, but aren’t stupid.

Harlow and Finn share so much in common, it is a delight to watch them navigate through the pitfalls and fall in love. And the sex is off-the-charts steamy and sensual. I absolutely loved Dirty Rowdy Thing.

From the New York Times best-selling author of Beautiful Bastard, Beautiful Stranger, and Beautiful Player, Book Two of the brand-new Wild Seasons series that started with Sweet Filthy Boy – a story of friends, love, and lust.

Despite their rowdy hookups, Harlow and Finn don’t even like each other… which would explain why their marriage lasted only 12 hours. He needs to be in charge and takes whatever he wants. She lives by the Want-something-done? Do-it-yourself mantra. Maybe she’s too similar to the rugged fisherman – or just what he needs.