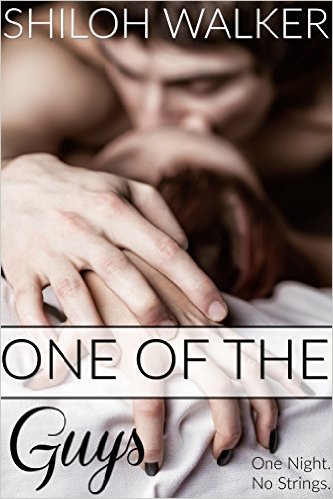 One of the Guys
Author: Shiloh Walker
Reviewer: Jen Twimom
Rating: B+

Jaynie Holmes was engaged to her longtime high school sweetheart, Dean Albridge, until she catches him in bed with his best friend and their busty neighbor. Taking comfort and refuge in Kate’s (her best friend) home, Jaynie is surprised when she feels an attraction to Kate’s older brother Brian, who also happens to be Jaynie’s co-worker and business partner.

One of the Guys is a super sexy, quick read. I loved Jaynie and Brian’s romance; a true friends-to-lovers story that was equal parts heartwarming and steamy. Brian and Jaynie’s chemistry was explosive, and Brian’s alpha demanding possessive side in bed was uber hot. I enjoyed that Jaynie took the time to evaluate her life and make changes for herself after leaving Dean.

I did have a few issues with the quick changing point-of-views between Jaynie to Brian, some of which were done mid-scene and without distinguish. I also didn’t like how negatively Brian reacted to a scene between Jaynie and Dean towards the end of the story. It felt overly dramatic and done for the sole purpose of conflict.

One of the Guys is an enjoyable, entertaining novella. In fact, I would have loved an epilogue or something to let me know how Jaynie and Brian were doing down the road, extending the story a bit longer. In the end, this is a wonderful short to pick up when you are in the mood for a satisfying love story.

Jaynie knew that her fiancé had some serious ménage fantasies going on, but she never expected to catch him acting them out. As if that pain isn’t enough, he tells her she couldn’t be a real woman if she tried. Reeling from the double blow, confidence shattered, Jaynie turns to Brian, her sexy partner at work. One night, she tells him. She wants one night with him, no strings attached.Brian feels plenty of strings and it’s as if all of them are pulling him toward Jaynie. She’s sexy, she’s funny and she haunts his dreams. Memories of that one night keep him awake and he’s dying for another taste of her.But Jaynie doesn’t seem at all interested. What’s a man to do?

Purchase Info:
One of the Guys

2 responses to “Review: One of the Guys by Shiloh Walker”