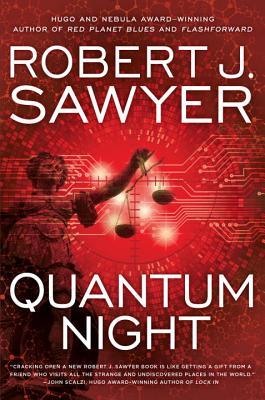 Author Robert Sawyer takes us through a really interesting intellectual exercise in Quantum Night. While it is a fictional story with a beginning, middle, and end, I felt more like I was sitting in a college philosophy class playing “what if” with the professor. What if… you could identify psychopaths with the accuracy of fingerprints?  What if… you could change their mental wiring so that they’re 100% “cured?”  What if… you had to trade places with the psychopath to make that happen?  What if… your child did?  What if… you discovered you had committed felonious acts, but didn’t remember them?  Would you turn yourself in?  What if… what if… what if…  This is how the story unfolds itself, answering one question and moving forward by addressing the consequences philosophically until another choice is presented.  Sawyer moves through the work of multiple psychologists and physicists in the process.  Sawyer clearly did his research.

Main character Jim Marchuk is a Canadian psychology professor who lives his life by the philosophy of utilitarianism, meaning he makes choices based on maximizing happiness for the greatest number of people, even if it requires sacrifice on his own part.  This alone makes him a controversial character because that utility translates into actions like giving a generous portion of his income to charity, but wanting his wife to get an abortion when they discovered their unborn son has Down syndrome and he would be a drain on too many public and private resources.  He relates to all the other characters that come and go from his life from this same perspective of utility and more than once I found myself arguing with his logic. At times he is sympathetic and at times he’s really not.  Sawyer is great at playing devil’s advocate through his characters.

Religion, as one would expect, is lacking from the scientific discussion.  Marchuk describes the majority of humanity as soulless apes with a monkey see, monkey do reflex.  In one particularly arrogant passage, Marchuk says, “The role of God has gone unfilled for too long… it’s high time someone got the part.”  This is an especially troubling remark coming from a man who often puts himself in the position of making choices for others based on his own value system.

There is a background romance that is weak at best.  Explicit sex would be out of place, but so is a sexual relationship that is described as rolling around “most pleasantly.”  Marchuk clearly had more passion about his work than his ex-wife, his son, or even his current girlfriend.

The quantum physics, as they relate to the characters and their state of consciousness, is approachable.  I felt it was sufficiently explained.  I could follow, but didn’t feel dumped on.  I appreciated the way the plot brought the physics to life, taking it from the theoretical to application.  And because this is a fictional story, Sawyer gets to take it to its extreme, thought-provoking conclusion.  Set in 2020, is the science behind it possible?  Almost—and that’s what makes it a fun read even if I was debating with Marchuk over his choices and the author over plot points. I will say, however, that like it or not, Sawyer covers himself with a great disclaimer in the author’s note at the start of the book, “Given this is a story in part about quantum physics, if they don’t like the future portrayed here, they can rest assured that in some other quantum reality they have different fates.”

Experimental psychologist Jim Marchuk has developed a flawless technique for identifying the previously undetected psychopaths lurking everywhere in society. But while being cross-examined about his breakthrough in court, Jim is shocked to discover that he has lost his memories of six months of his life from twenty years previously—a dark time during which he himself committed heinous acts.

Jim is reunited with Kayla Huron, his forgotten girlfriend from his lost period and now a quantum physicist who has made a stunning discovery about the nature of human consciousness. As a rising tide of violence and hate sweeps across the globe, the psychologist and the physicist combine forces in a race against time to see if they can do the impossible—change human nature—before the entire world descends into darkness.

One response to “Review: Quantum Night by Robert J. Sawyer”