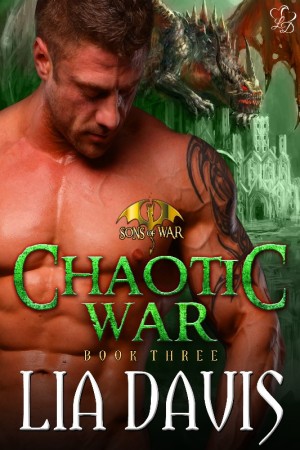 Hades wasn’t at all like Elle had expected. Standing on his doorstep, Elle couldn’t take her eyes off him. His silver hair was pulled back and bound by a strip of black leather at his nape. Black eyes stared at her, judging and approving at the same time. Dark magic surrounded him like snakes waiting to strike at a moment’s notice.

“She is prettier than you, Nyx.” Hades’ smooth, husky tone glided over Elle’s skin, sending shivers up her spine. The urge to run was strong, but she knew it was Hades’ energy that brought about the get-the-hell-away feeling.

Nyx let out a low growl. “All my children are beautiful in their own ways. Danielle is special.”

“Yes, I can see that. She is also your most powerful offspring.” Hades turned and stepped out of his home and walked down the path to the main road.

The Underworld wasn’t that much different than the human realm. The main differences were the lack of sunlight and green plants. It was darker, the only light coming from the firelight in street posts and the occasional hole to Tartarus in random places.

If Elle were still human, she’d find it a little depressing, but in her current state, she felt at ease and oddly comfortable. “Where are we going?”

“You’ll see,” Nyx said beside her.

Elle rolled her eyes. She’d never been good with surprises, especially if they came from the gods. It was a good idea to stay alert.

They came to a narrow bridge and proceeded across it. The hairs on the back of her neck rose. Her senses told her something wasn’t right. The energy flowing in the air had increased. Glancing over the edge of the footbridge, she noted it covered a large gap, a hole leading to the fiery pits of Tartarus.

When she lifted her gaze back to Hades, he narrowed his eyes at her then threw a ball of energy at her. She tried to dart out of the way, but she was too slow. It hit her, knocking her off the bridge. Fear burned her gut then raced through her. Closing her eyes, she tried to teleport. She only managed to flash up a few feet up then dropped back into the freefall. What the…? If only she could fly out of the hole.

On the heels of that thought, her shoulder blades ached then burned as two large, black wings shot out of her back. They spread wide, slowing her descent. She tested them, not really knowing how to control them. When they flapped on command, she smirked. She could fly. When she got back on that bridge, Hades was going to have a surprise of his own.

With two large flaps of her new wings, she started to move up. She moved faster and put some power behind each flap until she soared straight up over the bridge. Hovering over the king of the Underworld and her mother, Elle locked gaze with Hades. There was a challenge in his black depths.

Bring it. She formed a baseball-size energy ball and thrust it at the god. He deflected it with ease then shot a fireball at her. She darted out of the way and flew at him, hitting him in the chest. They rolled across the stone bridge until Hades pinned her under him. His eyes glowed with firelight, but his lips turned up in a small smile.

“You are not strong enough to challenge me. Soon, but not yet.” He ran his knuckles down her cheek and allowed his thumb to linger on her bottom lip. Was he going to kiss her? She squirmed, which drew a chuckle from him. After placing a kiss on her forehead, he stood and held out his hand.

She ignored the gesture and stood on her own. “What was all that?”

“Just testing your reflexes. I’m impressed. You are a quick learner, and your senses are honed, dialed in to your surroundings.” He continued along the path they had been walking before he threw her off the bridge. “Nyx, you did good with this one.”

Nyx quietly followed him, leaving Elle to tag along behind them. She’d never understand the gods. Zavier had warned her that the gods could be cruel. Although the Underworld king wasn’t cruel, at least not in his heart. His methods of dealing with people could be improved, though.

They came to a stop in front of a small stone cottage with crimson shutters accenting the windows. It looked like something out of a fairytale. Cute, small, and dark. Hades faced her and handed her a key. “This is yours. You are free to come and go as you see fit.”

Without blinking, he said, “You are a goddess now. So you will have a home here.”

Meeting her mother’s gaze, Elle frowned. Nyx cupped her cheek. “He likes you, and Hades doesn’t like most people.”

“Even after I attacked him.”

“That is why he likes you. You aren’t afraid to stand up for yourself. Plus, he knows you will protect your family at all costs. That kind of loyalty is rare.” Nyx gave her a small smile and motioned to the house. “After you.”

One response to “Sunday Snippet: Chaotic War by Lia Davis”