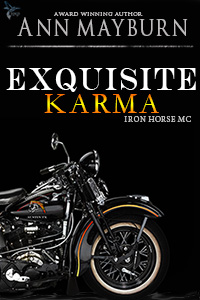 “Yes, dear.” I sighed as I looked around at the group of old ladies getting the food ready for the picnic and said in a lower voice, “Good thing he’s hot, ‘cause otherwise I’d have shot him a long time ago.”

“Woman,” Beach bellowed and I knew he knew he was annoying me. “I said bring your sweet a$$ over here.”

All the women erupted into giggles as I visibly twitched. Okay, not all of them, a few sour grapes were still pissy that I was Beach’s old lady, but I paid them no mind. I had better things to think about, like the blond epitome of biker hotness waiting for me. A little tingle went through me as I anticipated the feeling of his body against mine, of his scent filling me while he held me close. We couldn’t be near each other without touching in some way and I loved it.

Thank goodness, because he was beginning to worry me. Something big was going on and with every passing day the air of tension and alertness around him grew. Even now, in the middle of a family picnic, I noticed more Nomads were visiting us than usual, and they were all watching the property like a bunch of unchained, territorial pitbulls. These guys, for various reasons, didn’t belong to any particular Iron Horse club, but they were still part of Iron Horse. They roamed the land, going where they were needed, and usually f*cking someone’s sh*t up royally while they were there. For sure they were a different breed of biker, the kind that didn’t like to form attachments to anything or anyone, but they loved their President.

I just didn’t know why they were here. Yeah, they all came to visit ‘cause we were the National Chapterhouse, like bees returning to the hive, but so many of them at once, clearly on alert, sent my Spidey sense tingling. We weren’t in danger quite yet, but the potential hung in the air, gathering around the men like a deepening gloom. Not saying I can see aura’s like my friend Indigo can, but I felt bad sh*t coming over the horizon and couldn’t figure out what form that danger would come in.

Beach carried the burden of the entire MC on his broad and capable shoulders, but he’d pulled away from me a little bit over the past weeks. Nothing major, but enough that I knew he was getting trapped in his own head. If he didn’t give his mind at least a little bit of rest he was going to break and there was no way in hell I was going to let the happen.

I’d grown used to my loving, attentive man over the past year and I hated seeing him stressed out like this. The only way I could seem to reach him was physically, and if that’s what it took then I had no qualms about seducing my man. It was only after a good, rough round of sex that he would calm down enough to either untie me and make love to me, or make me sleep next to him with our wrists bound together by sheep-skin lined cuffs.

I lifted my hand against the glare of the sun, my eyes taking a moment to adjust after the dimness of the kitchen. The shouts of children and laughter of adults filled the air and I fought to keep from smiling when I spotted my man standing tall and proud with a group of rough men. I saw that his attention was totally on me and couldn’t help the big grin that curved my lips. Never in my life had I been this content, this secure, and this happy. All because of the mature blond haired man with eyes as dark as the deepest sapphire. He raised a brow, as if asking why I was just standing there and I started moving again, refusing to admit to myself that he affected me as much as he did. Thanks to all the recent rain the grass was a thick, lush green and a group of young boys were barefoot, running through it while they played with bubbles and toy trucks. A few people called my name, but I gave them a smile and a small wave, letting them know I’d talk to them later.

As in after I f*cked the sh*t out of my man, or vice-versa, later. He’d been gone so much lately, flying across the US to visit different clubs, and there was something big going on here, but he wouldn’t tell me about it. Not that I’d pushed him much. Truly, I was better off not knowing some of the things Beach did on a daily basis and I was okay with that. I just wished he could confide in me a little more so I could share some of his burden. Yeah I helped out whenever and wherever I could at the clubhouse, but I wish he could see what an asset I could be helping out with the business aspects of the club as well. But nooooo, I was a girl and girls couldn’t possibly understand the oh so complicated work the menfolk did.

If Beach wasn’t so hot I’d flick his balls for being a macho pig.