Hello! I’m Cornelia Grey—welcome to the Empty Hourglass blog tour! At various tour stops, I’ll be sharing some secrets about my writing process, sources of inspiration and future projects!

Comment on each stop to be entered in a drawing for a $15 Riptide Publishing gift card and the two previous titles in the Deal with a Devil series—Devil at the Crossroads and The Circus of the Damned—in an e-book format of your choice. Thank you for joining me on the tour!

The Empty Hourglass
Author: Cornelia Grey
Reviewer: B.
Rating: B

After losing his hand, as well as his beloved workshop, in a fire, Thomas Escott wants nothing more than to find a way to make things be as they were before. When a mysterious letter points him in the direction of an enigmatic inventor who’s touted as a genius in the creation of prosthetics, he thinks he’s found the answer to his prayers. But, as the truth begins to unfold, Thomas discovers that heaven has little to do with it.

Jethro Hastings gave up on everything, save for an extremely costly secret invention, after personal tragedy left him heartbroken and lost. Having secluded himself away in a decaying mansion with nothing but his work—and the rapid passage of time—to keep him company, the last thing he expected was the intriguingly capable toy maker who turned up on his doorstep. But, with the minutes running out, and a devil waiting in the wings, redemption may be beyond either man’s reach.

While I have enjoyed the Deal with the Devil series as a whole, I felt that this story was missing something. Although Jethro and Thomas have independently compelling backgrounds that led them to the main conflict within the narrative, I wasn’t as drawn in by them as I was by the events and characters of the second story in the series, Circus of the Damned. Having said that, I still think there is plenty about The Empty Hourglass to like.

A common theme that The Empty Hourglass continues, and which works nicely in this series, is the loss of purpose in the face of other worries and vices, such as hopelessness and grief, but also vanity and an unhealthy quest for glory. One of my favorite things about this story, however, is the author’s ongoing ability to make a postponement of damnation a kind of salvation instead at the hands of a soft-hearted devil and his ironic desire to set both men back on the “right” path.

Even though I wasn’t able to connect with this story on the same level as the previous one, there are still some very important messages in The Empty Hourglass, chiefly delivered through Dragana, Jethro’s “sister.” Thomas and Jethro have certainly had their share of loss, but so has Dragana, and her fortitude in dealing with the trials she’s seen makes her the strongest of the three, in my opinion. Her belief that she is fine as she is, despite Jethro’s insistence that he can “fix” her, made her one of my favorite characters in the entire novel. And, no matter what Thomas and Jethro do to try to repair or alter the events that have led them to this point, nothing can erase what happened in the first place.

Overall, I enjoyed The Empty Hourglass, and feel that it was a good addition to a series that I’ve come to like a great deal. While it lacks the pacing and sinister appeal of the second story, it has a lot going for it on its own, and I couldn’t help but be charmed by some of the additional characters and technology that are present throughout the narrative. While The Empty Hourglass can certainly be read as a standalone (a crucial recurrent character has even had a different manifestation in each story so far), I think the entire series is definitely worthwhile. Given the significant differences between all of the stories, I’m very interested to see what Ms. Grey might come up with next. 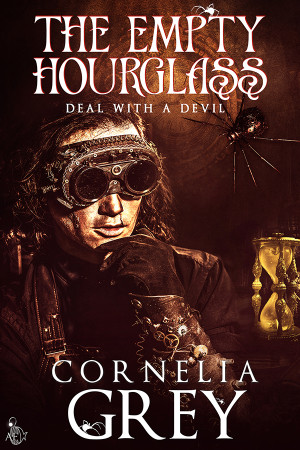 Thomas Escott has always wanted to be a toymaker, yet just as he achieves his dream, an accident claims his right hand. He’s certain his life is over—until he hears about groundbreaking prosthetics being made by a reclusive inventor.

Jethro Hastings is perfectly content to live alone up in the mountains working on a secret masterpiece: a humanoid automaton that will change the scientific community forever. He’s behind schedule, and the date of the unveiling is fast approaching, so when Thomas shows up on his doorstep offering help in exchange for a mechanical hand, Jethro agrees. Time, after all, is running out on another deal he’s made: one with the devil.

The devil gives Jethro’s inventions life, but he can just as quickly take life away—Jethro’s, to be exact. As the sand in the devil’s hourglass falls, marking the time until the end of the deal, inventions go haywire, people get hurt, and Thomas realizes he needs Jethro just as much as his prosthetic. Now he must find a way to save Jethro’s soul, but negotiating with a devil is just as difficult as it sounds.

Cornelia Grey is a creative writing student fresh out of university, with a penchant for fine arts and the blues. Born and raised in the hills of Northern Italy, where she collected her share of poetry and narrative prizes, Cornelia moved to London to pursue her studies.

After graduating with top grades, she is now busy with internships: literary agencies, publishing houses, and creative departments handling book series, among others. She also works as a freelance translator.

She likes cats, knitting, performing in theatre, going to museums, collecting mugs, and hanging out with her grandma. When writing, she favors curious, surreal stories, steampunk, and mixed-genre fiction. Her heroes are always underdogs, and she loves them for it.

To celebrate the release of The Empty Hourglass, Cornelia is giving away the two previous titles in the Deal with a Devil series—Devil at the Crossroads and The Circus of the Damned—in an e-book format of your choice, plus $15 in Riptide credit. Leave a comment to enter the contest. Entries close at midnight, Eastern time, on April 16, 2016. Contest is NOT restricted to U.S. entries. Thanks for following the tour, and don’t forget to leave your contact info!