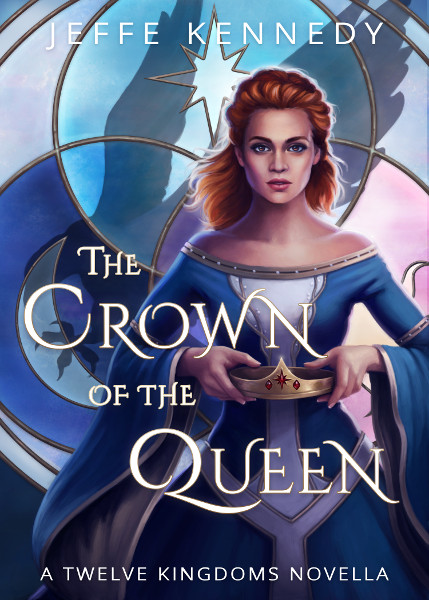 The Crown of the Queen
A Twelve Kingdoms Novella
Dafne Mailloux, librarian and temporary babysitter to the heirs to the High Throne of the Twelve – now Thirteen – Kingdoms, finds it difficult to leave the paradise of Annfwn behind. Particularly that trove of rare books in temptingly unfamiliar languages. But duty calls, and hers is to the crown. It’s not like her heart belongs elsewhere. But how can she crown a queen who hesitates to take the throne?

This novella will be part of a duology called For Crown and Kingdom, which will also contain a novella by Grace Draven.

For Crown and Kingdom (The Crown of the Queen) will release on May 24, 2016 and will be available in digital format and print.

For more information, please visit: http://www.jeffekennedy.com/for-crown-and-kingdom/. Information and purchase links will be added as it becomes available.

Jeffe can be found online at her website: JeffeKennedy.com, every Sunday at the popular Word Whores blog, on Facebook, on Goodreads and pretty much constantly on Twitter @jeffekennedy. She is represented by Connor Goldsmith of Fuse Literary.

6 responses to “Cover Reveal: The Crown of the Queen by Jeffe Kennedy”