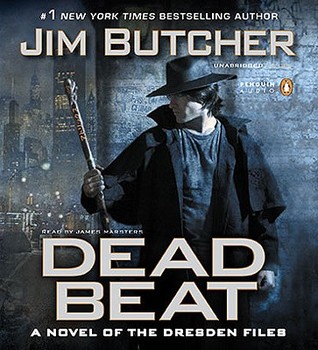 Time goes on and Harry Dresden continues to battle the dark forces that mean to harm the mortals of Chicago. This time around, Harry learns that a group of necromancers are in town to summon a powerful entity and turn themselves into powerful gods. Harry is the only one with the right combination of knowledge, power, and friends to get the ball moving to stop the terror and save Chicago.

I rather enjoy listening to the Dresden Files on audiobook, and generally the stories are superb, with Dead Beat being no different. However, I have to say that this one ranks as one of the lesser titles for me. It was very dark, and I found that Harry had to endure and struggle way too much this time around. Overall, the story is a good one, and I like that Harry is learning to rely on friends and his brother more and more. His connection with Thomas is evolving, and they share a great discussion early on in the story. The best part of the book for me, was witnessing Harry connect with someone from his past. It was tender and emotional, and made Harry so real.

With that said, I felt like the story spent too much time on Harry’s moral dilemma of getting help from a dubious character. His internal struggles went on and on, resurfacing over and over, and frankly, they bothered me. Harry already struggles so much, with how is perceived, and I really don’t want to follow a series where the character slowly slides down a slippery slope. Additionally, there were just one too many horrible events that happen to Harry. How much can one guy handle? And how can he continue to have lengthy internal monologues while being tortured?

While I did find a few issues with the story this time around, the narration by James Marsters was exquisite as ever. I could probably listen to him describe how to build a nuclear reactor and still enjoy it. He has captured all that makes up Harry Dresden in his voice, while able to create distinct variations for each of the supporting cast.

All-in-all, I found that I still enjoyed listening to Dead Beat, despite some of the concerns I had with the tone of the book and direction the author seems to be pushing Harry. I missed the sly humor that usually makes me smile regardless of the dangers Harry battles. Harry is undergoing changes, some better than others, and I cautiously look forward to finding out which path he chooses, or if he’ll continue to straddle the line.

Story: B
Narration: A