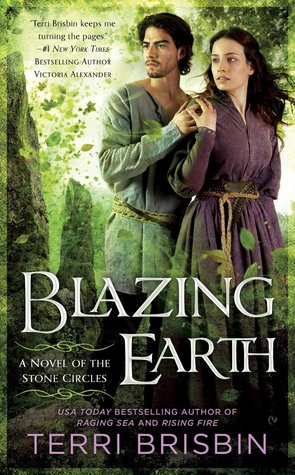 In this third installment of the Stone Circles, the tone of the novel changes. Though I liked the journey of Tolan and Thea, there was a more somber feeling and desperation to the world.  It seems the plight of our heroes has reached a pinnacle in Blazing Earth.

***Please note that this series builds upon the previous novel.  Therefore there may be inadvertent spoilers in this review.  You have been warned.***

This is a tough review to write because I do not want to spoil the novel, but I do feel as if the progression of this novel is very different from the previous ones.  Though there is a logical conclusion that brings about a higher tension to the impending final confrontation, it was still in some ways a tough read.  Tolan and Thea must work though some emotional baggage that affects their actions and choices in this journey.  I love how they overcome it, but their story is so bittersweet.  Death and loss has always been a part of this series, but I found it much more poignant in this installment.  Maybe it is due to the outcome of events, but although Tolan and Thea do end up together (I hope that isn’t too spoilery for a romance novel) the course of their romance took me by surprise.  It makes me nervous and eager for the next novel.

I continue to enjoy this world and the mythology associated with it.  The different bloodlines that are tied to the Old Ones (old gods) and how they are vessels for these past gods to protect the world from Chaela.  The manifestation of powers and the mixing of the religions are fascinating.  I also enjoy the contrast as these bloodline carriers discover and learn about these traits they have inherited.  The legend of the Warriors of Destiny is thrilling as each book adds the next players.  It is clear that we are heading into the final battle and I cannot wait to see if our heroes will triumph over evil.  I’m thinking they will, but I wonder how much heartbreak, tension and suspense I’ll have to endure before we get there.  I really do like how the stories do not always progress as I expect – especially in Blazing Earth.

Tolan and Thea’s romantic journey is compelling.  Though bittersweet in moments, their connection is steel.  They are passionate and perfectly suited for each other.  I love how determined Tolan is.  Though he knows Thea’s past, he proves to her through his interactions with her that he is different from her late husband.  I really enjoyed how though Tolan loved his late wife, he recognizes that he loves Thea, differently, but loves her all the same.  Thea’s path to happiness is a tough one and I respect how she grows towards Tolan and that she willingly takes the risk to love him through her fears.  Their love is compelling.

I will say that my heroes have much greater forces to face in the next novel.  Though I have no idea what happens next, I eagerly look forward to the next novel.  Considering the mythology, I wonder if the next novel may be the last in the series.  If you enjoy fantasy romance mixed with suspenseful action, you may want to pick up the Stone Circles series.

Tolan of Durlington is a farmer whose ancestors have tended the same lands for centuries with astonishing success. His hope for the future is that his son—and his sons yet to come—will carry on the traditions. But, his carefully laid plans are shaken by the village healer he’s come to love.

Unable to bear children, Elethea can offer Tolan only companionship and physical comfort. When hidden powers in their blood—powers to command the fertile earth, to draw from the healing sun—explode into being, their world and lives are changed forever.

Soon, the fate of humankind is in their hands as the wrathful goddess grows closer to escaping her prison and destroying the world as they know it. Battling the goddess’ followers and their own fears, can these two lovers protect mankind and still survive to find their own future?