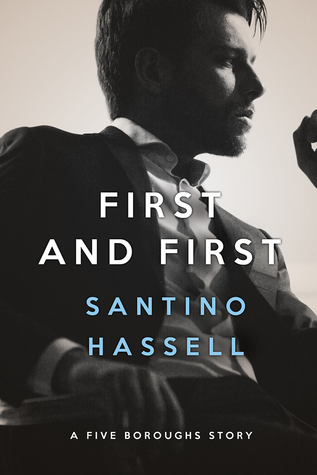 First and First
Author: Santino Hassell
Reviewer: B.
Rating: A

No matter how hard he tries, Caleb Stone always manages to disappoint those around him: his parents, his former work associates, his ex-boyfriend… Spending an alcohol-soaked New Year’s Eve observing the happiness of others only highlights the fact that nothing in his life has gone the way he wanted it to. It all makes the idea of giving up on romance entirely seem like a pretty good one. Of course, waking up next to a gorgeous acquaintance might not have been what he had in mind, either, but things have certainly been worse.

Going from riches to rags after his parents threw him out when he was eighteen taught Oliver Buckley a lot about being independent. Being cast aside by a man who only wanted to use him for the status he no longer possessed taught him to never give his heart away again. Now, he’s got money of his own, no attachments weighing him down, and a standing invitation to the most exclusive scene parties in NYC. Everything is perfect. At least, until a one-night stand with Caleb flips his entire world inside out.

Having primarily seen the worst of Caleb in Sunset Park, the previous story in this series, I was relieved to find that spark of “something else” I saw in him given a chance to take over in First and First. Caleb’s acceptance of his need for control, for things to fit what he sees as a logical order, is so absolute that it’s strangling him, as well as infecting every other relationship he has. He isn’t tyrannical (that’s his father’s job), just very, very stuck. He’s been emotionally isolated for so long that trusting others and letting go is impossible for him. Until his drunken night with Oli, anyway (which he can only remember in sporadic flashbacks). Yet, even with Oli, he initially thinks salvation might be found in following the other’s lead, only to learn that trying to shove himself into someone else’s mold won’t do him any good, either.

Oli, on the other hand, has custom-built his world just the way he likes it. Happily rough around the edges, Oli could easily be dismissed as the blithely hedonistic party boy, except he’s most assuredly more than that. He and Caleb actually have quite a lot in common, but Oli’s version of control is expressed much differently. Adept at flinging off expectations, he never lets anyone get close enough to truly care for him. Ambushed by his own feelings for Caleb, though, he realizes he wants more—a terrifying prospect, given his usual tendency to pursue what he desires. The result is a messy stumble of advances and retreats that leaves them both angry and needy.

There’s no way to discuss First and First without talking about sex. Caleb’s previous inability to generate any legitimate intimacy in his relationships, both sexual and otherwise, is inextricable from the lockdown he has on the rest of his life. Under the surface is another matter, however, and, thanks to the application of a great deal of alcohol, Oli witnesses all that control unravel spectacularly during sex. It’s no wonder he becomes so captivated, really. The only thing he hadn’t counted on was Caleb’s self-discovery leading him in an entirely new direction instead.

Another aspect of First and First that cannot go without mention is the presence of social media. It’s a remarkably complex and vital entity in most everyone’s lives at this point, and Mr. Hassell has made admirable use of it here. As is true in the world outside of this novel, there’s simply too much about the topic to adequately explore in a review, but its familiar pervasiveness felt right and helped me feel more connected to the story as a whole.

In addition to Caleb and Oli, Mr. Hassell has brought back some of my favorite characters thus far, as well as introduced his readers to some intriguing new voices throughout the narrative. Michael and Nunzio make an appearance, and, though it’s brief, their personalities are just as distinctive as ever. With their obvious connection to Caleb, David and Raymond feature more prominently, which I also loved. Although I still had some difficulty with David’s perspective, Raymond was unsurprisingly sublime, and I was thrilled that my adoration of him hasn’t lapsed one bit. The new characters that caught and held my attention are too numerous to mention individually, and I strongly recommend discovering them all firsthand through the story.

The Five Boroughs series continues to be sharp, fearless, very well-written, and about as far from “fluffy” as I could have hoped for. Although each story can be read as a standalone, I wholeheartedly recommend reading the entire series. Once again, Mr. Hassell has opened the door to a world that pulses and breathes, as well as provided much needed visibility to issues and truths that don’t get consideration they deserve. First and First beautifully implies that we are not destined to be static, unmalleable beings relegated to ceaseless patterns of behavior by the events that have previously influenced who we are. Rather, it suggests that, despite all those things, there are possibilities amid the tatters, and that we don’t have to get there alone.

Caleb Stone was raised on the Upper East Side, where wealth and lineage reigns, and “alternative lifestyles” are hidden. It took him years to come out to his family, but he’s still stuck in the stranglehold of their expectations. Caleb knows he has to build his confidence and shake things up, but he doesn’t know how… until Oliver Buckley enters the picture.

Oli is everything Caleb isn’t—risk-taking, provocative, and fiercely independent. Disowned by his family, Oli has made his own way in the world and is beholden to no one. After a chance encounter on New Year’s Eve, Caleb is smitten.

As Caleb sheds the insecurities that have held him back for years, he makes bold steps toward changing his career and escaping years of sexual repression. But for Caleb to take full control of his life, he has to be brave enough to confront his feelings and trust Oli with his heart.

2 responses to “Review: First and First by Santino Hassell”