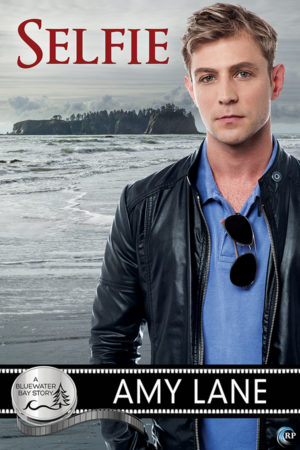 The Bluewater Bay series has continually proven to be among the best I’ve ever read, and Selfie, by Amy Lane, is one my favorites to date. Told from the perspective of Connor Montgomery, movie star and grieving “basket case,” it isn’t the tale of a Phoenix rising, or miraculous rebirth. It is, rather, a story about coping and healing, honesty and loss, and loving again.

To begin with, Ms. Lane is an undeniable asset to this series, as was already proven with her previous additions, “Nascha” (from Lights, Camera, Cupid!) and The Deep of the Sound. I absolutely fell in love with these characters. Connor is, frankly, a heart-broken mess. He’s also enviably strong, quirky beyond reason, and kind to a fault. My heart ached for him over and over, but I couldn’t stop hoping that he would be okay with everything in me.

As much as I liked Connor, though, Noah Dakers, local Philosophy grad and driver/bodyguard/PA/etc. for the studio producing “Wolf’s Landing,” stole my heart and kept it. Noah is gorgeous, inside and out. I can’t think of a single thing I didn’t completely love about him. He’s incredibly astute, patient, funny, brilliantly sarcastic, sexier than should surely be allowed, so loving it hurts—pretty much perfect in all the ways that make me want to read Selfie again and again.

While Connor and Noah are the two main characters, it would be wrong to ignore Connor’s former love, Vinnie, as the third. He’s simply always there. One thing that I appreciated a great deal about Ms. Lane’s treatment of his memory is that it changes as Connor tries to find a way to live again. Initially, his perfection is suggested by the enormity of his absence in Connor’s life. But, that idyllic love starts to break down memory by memory, becoming something real—cracked and frayed in places, and giving Connor’s reawakening a weight it might not otherwise have had. Just as important, I think, is that, while Vinnie’s flaws are presented with a stripped-bare honesty, it is done without taking the easy out and completely vilifying him.

One of the most beautiful things about Selfie is its treatment of the unquantifiable nature of grief. Through the characters’ various perspectives, Ms. Lane dissects the reality of loss and presents it as a living, evolving entity, unique to each individual, even though common threads may be shared by many. This story also serves as a reminder that healing doesn’t necessitate forgetting, and that it’s possible to be sad and “not-broken” at the same time. Remembering the flaws and anger in a relationship is okay. So is continuing to live.

As much as I was moved by the more somber parts of Selfie, I was also delighted by the parts that made me laugh so hard I really and truly cried. During one particular scene in the kite store, I cackled so loudly that everyone in my house stopped what they were doing and came over to find out what was so funny. And it took several minutes for me to be able to breathe well enough that I could. It’s not goofy, slapstick humor at work, though. No pratfalls or forced jokes. Just shimmering, bright moments that left me feeling warm and very attached to these characters.

Thus far, everything I’ve read by Ms. Lane has been spectacular, and her Bluewater Bay titles are some of my favorite of the series. I want to devour everything she’s written that I can get my hands on at this point, and I’d absolutely love to see more of from her here. Not just a romance, Selfie is an exploration, not only of the complexities of being “out” in the world—although that is one of the more deservedly important premises of the narrative—but, of being human. It drew me in like few stories can, and it will remain on my re-read list for a long time to come.

One year ago, actor Connor Montgomery lost the love of his life to a drunk driver. But what’s worse for Connor is what he still has: a lifetime of secrets born of hiding his relationship from the glare of Hollywood. Unable to let go of the world he and Vinnie shared, Connor films a drunken YouTube confession on the anniversary of Vinnie’s death.

Thankfully, the video was silent—a familiar state for Connor—so his secret is still safe. He needs a fresh start, and a new role on the hit TV show Wolf’s Landing might be just that.

The move to Bluewater Bay may also mean a second chance in the form of his studio-assigned assistant. Noah Dakers sees through Connor’s facades more quickly than Connor could imagine. Noah’s quiet strength and sarcastic companionship offers Connor a chance at love that Hollywood’s closet has never allowed. But to accept it, Connor must let Vinnie go and learn to live again.

For the Selfie blog tour, Amy Lane has written a few monologues from Vinnie’s video blog, set prior to the crash that takes his life. These monologues, performed by Nick J. Russo of Dark Night Sound, correspond to scenes or memories reference by Connor in Selfie, giving you a unique look at this off-screen character.

Please visit http://riptidepublishing.com/titles/selfie and select the extras tab for all six monologues, which will be updated there as they are published.

Amy Lane exists happily with her noisy family in a crumbling suburban crapmansion, and equally happily with the surprisingly demanding voices who live in her head.

She can be found at her computer, dodging housework, or simultaneously reading, watching television, and knitting, because she likes to freak people out by proving it can be done.

Nick J. Russo has been a professional performer for over a decade, but has been voicing audio books for the past few years. He has voiced several titles throughout the romance, sci-fi, supernatural, and thriller genres, and has recently started his very own sound studio; Dark Night Sound. On top of voice acting, Russo manages Dark Night Sound with his fiance and works with a staff of four up and coming narrators. In his free time, Russo is a drummer in a pop/rock cover band, loves to travel, and dreams of one day being able to voice a role in an animated comedy series.

To celebrate the release of Selfie, one lucky person will receive e-copies of Amy’s entire backlist with Riptide, and an Amy Lane t-shirt. Leave a comment to enter the contest. Entries close at midnight, Eastern time, on April 23, 2016. Contest is NOT restricted to U.S. entries. Thanks for following the tour, and don’t forget to leave your contact info!