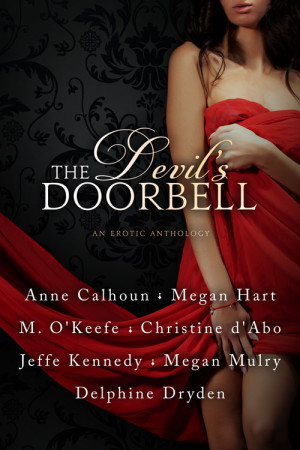 Tonight, my name is Sydney.

Call me Syd. She’s easy to dress as she doesn’t worry much about clothes. Plain cotton bra—no underwire because they pinch—and her panties have colorful unicorns on them farting rainbows. Syd isn’t all about the books, she has her whimsical side, too.

Her hair is dark brown, a simple square cut with heavy bangs. She wears glasses with thick black rims and a hint of a cat’s eye horn at the edge. All of these things are important because I can’t put too much obvious makeup on her. Syd’s getting her master’s in comparative religious studies and she’s particularly interested in the question of vanity and mortification of the flesh to purify the spirit, New Testament style. I can’t go near the Torah anymore.

I go with darker foundation for her skin, not so much that it will look funny when she’s naked, but enough to distort her mouth and cover the putty on her nose—the only features that really show. I go with a matte lipstick for her, the kind that looks like none at all, and add a cherry ChapStick overcoat, then stick the tube in her jeans pocket. Dark brown contact lenses for her eyes, which look intense even behind the unfashionably thick lenses of her glasses.

Even without the underwire, Syd’s tits look pretty good in the tight sweater. Enticing enough to reel in a college boy, anyway. They’re always hard up.

The college guys aren’t there, however, though it’s a Tuesday again. Disappointing as the thin crowd doesn’t promise much. Maybe Syd will sit at the bar, read a book and nurse her drink. A girl like Syd might go home alone. She doesn’t have to get laid.

But I do. After Disappointing Daniel, I need to get off. Badly. I’m restless with it, edgy. Probably I should have been someone else for tonight, to score the really good bang. I nearly went for Caitlyn and couldn’t. Too soon after Tiffany. I still miss Mary. I’d had to force myself to burn that wig, lest I break down and wear it a second time. It never works to be the same woman twice. Too much like my life before, the forever trying to be the right person and forever failing. I want to be Mary again, but that way lies disappointment and more of that might break me forever.

The only other disguise that appealed was Sydney’s dark wig and obscuring glasses, so that’s what I did. I’ve learned to go with instinct.

Syd chooses a stool at the darker end of the bar, as far from the televisions as she can get, and puts her book on the glossy golden wood.

“Be right with you,” the bartender calls out, and Syd nods, opens her book, clips on the little reading light. A guy down the bar a bit raises a glass to her. She smiles. A bit shy, but she’ll warm up. He’s her type, academic-looking, not a suit. I’ve had enough of the business travelers for a while.

“What’ll you have?” the bartender asks. He tosses the towel over his shoulder. Tonight his T-shirt says, in faded white letters on soft black, “There are 10 kinds of people in the world. Those who understand binary and those who don’t.”

“Ha! Love the shirt,” Syd says before I can stop her. What happened to shy?

“It’s always interesting who gets it,” he replies, with that grin I like. He peers at my text. “Confessions of St. Augustine?”

“The saint who gave up wealth, wine, women, and excesses of all kinds to purify the spirit.”

“Yeah—but at the end of his life. I’m not sure it counts when you indulge for sixty years and then go all holy when you can’t get it up anymore.”

“How do you know he couldn’t?”

“Who gives up sex when they can still do it?”