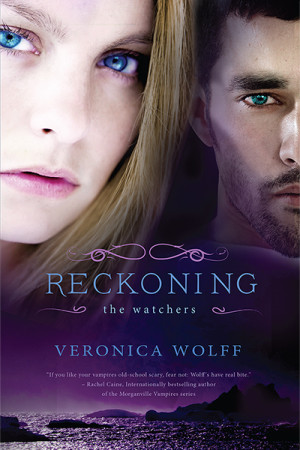 “You have changed my life. Given me hope.” His hand traced down my side, dipped to my waist. Stroked along my hip and down my thigh. “You are light where there was only darkness.”

I turned into him. We lay on my bed in the shadows. His eyes, even in the dimness of moonlight, were haunted. It was dark, and yet I could call to mind their deep green color as easily as I could the shape of my own hand. He was mortal and only a couple of years older than me, but sometimes those eyes made him seem as ancient as any vampire.

That gaze was heavy on me now. Drawn to me only.

But he was done with talking. He pulled me closer and kissed me softly. I savored the feel of lips I could draw from memory. How long I’d studied every inch of that face, and yet so few days had passed since it’d been mine to touch.

He drew back. Those eyes, so soulful and all-seeing, remained locked on me. “Why are you with him when you should be with me?”

My throat clenched. Carden. My affection for the ancient Scottish vampire ran deep. The bond I shared with him infused my blood.

But this thing I felt for Ronan, it went beyond chemical. It penetrated a secret heart I didn’t realize I had.

Ronan must’ve seen the thoughts flicker across my face because he brushed the hair from my forehead, as though he might sweep my mind clear. “Let’s run away. We’ll disappear. Live in some faraway place.” His voice was suddenly husky with intensity.

I was…what? In love with Carden?

Was I? How was that possible when all my mind could summon was Ronan?

“I’m with Carden,” I said finally. We shared a bond—a bond that might endanger me were it severed.

He pulled away completely then and rolled onto his back, leaving a Ronan-sized chill along one side of my body.

“You’re with Carden because you bonded,” he told me, his voice tight. “By accident. It’s naught more than a chemical reaction. You might as well be bonded to a drug. It’s your blood that calls for Carden.” He swung that tormented gaze back to me, and it was like the tide, mysterious and powerful, drawing me more deeply to him. “But your heart? Tell me, Ann. What does your heart tell you?”

“My heart?” My heart pumped blood that was bonded to Carden. To cut that bond would be to endure the blood fever. “There’s no way around it,” I said finally. Desperately. “The blood fever…”

I’d been parted once before from my vampire. The physical effects were devastating.

Ronan’s hand flew to my face, cupping my cheek. “The blood fever I can soothe.”

The hope in his voice cracked something inside me.

Ronan had the power of persuasive touch. It was what he used to convince kids like me to come to this island of death. The vampires identified us—teenaged misfits, runaways, addicts, those of us who wouldn’t be missed—but it was Tracers like Ronan who traveled the world, hunting us, bringing us to the Isle of Night. Different Tracers had different strengths, and Ronan’s was his touch—when he used it, it was enough to persuade anyone to do anything.

I rolled away. “Your touch could help, sure, but for how long? You’d soothe the blood fever, but eventually—”

“It could be gone forever. If you let me try.” He took my arm and pulled me back into the shelter of his body. “I’m strong, Ann. Stronger than you know.”

He was strong. Could he be that strong?

Before, I wouldn’t have thought so. But recently I’d seen him unleash his power on a vampire. It’d almost been enough to overcome one as ancient as Master Dagursson. Might it be enough to completely sever a blood bond?

“You must let me try, at least. Think, Ann. You could be parted from him forever. Let me do this for you.” His tone grew earnest then. “For once, let me use my power for good.”

I’d never heard him sound so vulnerable. I’d always known Ronan despised the work he was forced to do. Increasingly, he let me in enough to see just how deeply his hatred ran.

“But how…” The words came so slowly, my mouth frozen. “How…”

I couldn’t get the words out. Why was my jaw so leaden? My tongue so thick?

I opened my eyes. I was in Carden’s arms.

One response to “Sunday Snippet: Reckoning by Veronica Wolff”