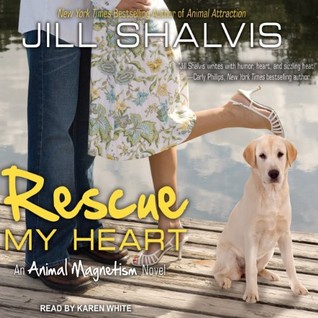 Rescue My Heart follows Adam Connelly, a veteran suffering from PTSD who works as Sunshine’s search and rescue specialist but hasn’t been on an active rescue since leaving the military. When the one woman he’s ever cared about works her way back into Adam’s life, he has to work extra hard to keep his defenses up and emotional walls in place.

After giving up her New York life to move to Sunshine and manage her father’s ranch, Holly is finally finding some happiness. Yet seeing Adam around town is a harsh reminder of the love she once thought they shared only to have him break her heart. However, when her father goes missing, Holly turns to the one man she knows can find him.

Rescue My Heart is the third story in the Animal Magnetism series, which centers the Connelly brothers at their Sunshine, Idaho, animal clinic. After absolutely loving the second book in the series, I had a tough time getting into Adam and Holly’s story. First, I was a bit put off by some slight changes in the narrative voices for Adam, his brother Dell, and receptionist Jade. Dell and Jade were the primary couple of book two, with Adam a side character. It sounded like the narrator kept the same voices for the hero/heroine, transferring Dell’s voice to Adam and Jade’s voice to Holly, which gave Dell and Jade new voices. After a while, I didn’t notice the change, but listening to the books back-to-back, it did bug me for a while.

Secondly, I struggled with some possible inconsistencies. In the second book, Dell teased Adam, telling him he should sleep with Holly. However, at the beginning of Rescue My Heart, we find out that Holly is married. Additionally, Holly and Adam share a past, and it’s confusing why others aren’t aware of their past. Fortunately, these issues work themselves out, but it frustrated me for a while.

Luckily, after these issues worked themselves out, the story gathers a lot of momentum. Once Holly and Adam start their search for Holly’s father, I became engrossed with the book, especially Holly and Adam’s romance. I loved Holly’s determination to make herself happy and how she goes after Adam knowing he may break her heart again. It took a while for Adam to grow on me, keeping his walls up for quite a long time made it hard to fall for the man, regardless of how sexy the man is.

After my initial issues with the narration, I found Karen White’s performance steady and pleasant. Within the story, she keeps each voice unique and consistent. Holly’s voice is feminine and strong, suiting her character. Adam’s voice fits his thoughtful, quiet persona.

Overall, Rescue My Heart is an enjoyable addition to the Animal Magnetism series. Although I had some issues early on with both narration and character development, everything smoothed out quickly. Adam and Holly’s romance is both sweet and sexy, making for an entertaining tale.

6 responses to “Listen Up! #Audiobook Review: Rescue My Heart by Jill Shalvis”