Audiobook review: Rumor Has It 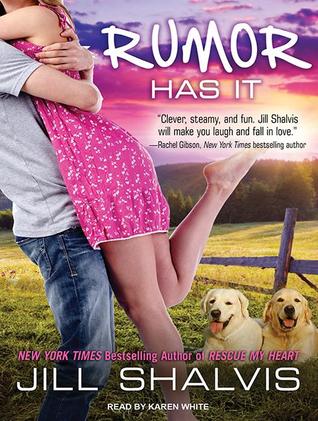 Kate takes care of everyone but herself. She is practically raising her two younger siblings with little help from her dad. She’s had one boyfriend in the past several years, and continually puts off the full scholarship to attend her dream graduate program in California. She’s had a crush on Grif since she was ten, and she’s trying hard to keep calm while he’s back for her best friend’s wedding.

Grif is home for his sister Holly’s wedding, but what he hasn’t told anyone is that an IED explosion in Afghanistan nearly killed him and left him unemployed with a medical discharge from the Army. Now he has to decide if he’ll make peace with his father and his childhood home or head off and leave home, again.

Rumor Has It is the fourth title in the delightful Animal Magnetism series. This time around the book features the slow-burning romance between Army veteran Grif and his sister’s best friend, Kate. The pair is adorable and genuinely sweet (Kate HATES to be called sweet!) Kate is tired of all the responsibilities in her life and wants just one wild night for herself, throwing herself at her childhood crush time and time again. Yet Grif won’t bite; he’s been threatened by his sister to stay far away from the vulnerable Kate. However, when they finally do connect, sparks fly! Their chemistry is palatable, and it’s a joy to watch them figure out how they fit into each other’s life.

Other than a few poor decisions made by the characters, overall the book is highly enjoyable. However, I did do a major eye roll when Holly INTERRUPTS Kate’s second grade class to talk with her about sleeping with Grif. Not. Cool. Maybe I’m too responsible, but this was above the top ridiculous.

I found the narration by Karen White more consistent from book to book, than in the previous books. Her voices for the two primary characters was fitting, adding the right mix to suit the personalities of both Kate and Grif. Her performance of the rest of the cast was also enjoyable. I up’d my listening speed to 1.5x this time around, and found it just right for me.

Overall, I am really enjoying my extended stay in Sunshine, Idaho, with its sexy and cheerful residents. Rumor Has It was highly entertaining and a great mix of romance and side stories. There was even an interesting twist I didn’t see coming, used to add some conflict. I really liked both Kate and Grif, and how balanced their feelings and affection were. I continue to look forward to more stories in the Animal Magnetism series.

7 responses to “Listen Up! #Audiobook Review: Rumor Has It by Jill Shalvis”