Posted May 3, 2016 by B. in Paranormal Romance, Rating B, Reviews Tags: Bs-review, Christi Snow, self-published, Through the Veil series 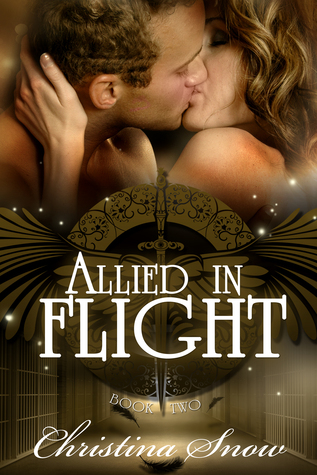 Allied In Flight
Author: Christi Snow
Reviewer: B.
Rating: B

Ever since the veil was breached, things have begun to change rapidly for Griff Hughes and the other inhabitants of the Western States (WS). Along with differences in the physical workings of their environment, Lori’s arrival from the ES has caused some additional unexpected side effects—like the helpful, yet highly invasive mental bond he now shares with his teammates. As someone who generally likes to keep to himself, having three other people in his head all the time has been a challenge. But, when their rescue mission goes wrong and Griff finds himself held prisoner alongside the beautiful shifter he intended to save, an entirely new kind of connection is made that will alter his life forever.

Three years of confinement and torture have made Shar McIntire a survivor of the highest order. As long as she had her sister, Savannah, with her, she believed she could handle anything their captors devised to break them. But, waking up in a strange place, alone, without the voices of her makeshift family to keep her company just might be too much to take. Until a man with wings makes her crave more than her own freedom, and shows her that falling in love could be the most dangerous outcome of all.

Picking up right where the previous novel in the series, Through the Veil, left off, Allied in Flight begins in the middle of an attempt to rescue a group of Others (people with supernatural abilities) from their captors. And things are not going well. Where the first story included a lot of world building and introduced readers to life in the more natural and environmentally-conscious Western States, Allied in Flight further explores the twisted authoritarian society and resulting cruelty of the Eastern States.

One of my favorite things about this story is the bond that forms between Griff and Shar from the beginning. Although such an instant and profound attachment would otherwise be difficult to accept, theirs is born from the pressures of captivity, making it all the more believable. In fact, despite several instances when their lack of communication frustrated me, their mutual protectiveness in the face of their obvious emotional connection seemed very sweet. And very sexy.

As a tale of “Romantic Suspense,” Allied in Flight works very well. Throughout Shar and Griff’s imprisonment, escape, and the connecting adventure in New York, there is an ever-present sense of time running out. There isn’t much in the way of downtime, given the characters’ perpetual shifting between plotting and evading, only to begin again as soon as they get to a place of supposed safety. But, that’s sort of the point: there is no safety in the ES, and a revolution may be needed to bring it down.

As much as I’m enjoying this series, there were some things in Allied in Flight that bothered me. The “on” and “off” nature of the mental connection between Shar and Griff seemed a little too easily manipulated at times, given that it’s made clear that theirs is deeply embedded and surprisingly pervasive. There’s also a very close call during a would-be rape scene early on in the story, as well as the extremely vivid aftermath of a rape perpetrated on another character later on. Even with the need to reiterate the policy of brutality in the ES with regard to the Others, I felt that this was somewhat overly disturbing.

With two stories in the Through the Veil series now complete, it’s becoming more feasible that some sort of balance might ultimately be achieved between the groups of survivors. Given that it’s been over a year between the first story’s publication and Allied in Flight, however, I strongly recommend a quick reread before jumping in. Even though I had trouble with a couple of things in this story, I still think the series has a fascinating premise, and I was very happy to see the list of projected titles on the author’s site, as well as the promise at the end of Allied in Flight that some of my favorite characters won’t be forgotten. I’m looking forward to reading every one.

It was supposed to be simple. Four members from the Western States planned to sneak into the Eastern States to free four condemned Others. But when they arrived at the experimental labs where the Others were being held, it was under attack from Rebel forces.

Griff Hughes had one job…

He had to find Shar, a wounded hawk shifter. But in the ensuing chaos, he became a captive instead of a rescuer. Three days later he awakens in his own cage, alone. But during the nights, he’s not alone. An alluring redhead with a siren’s call visits his dreams, and his resistance is breaking down.

After three years in captivity, Shar has one goal…keep her and her sister alive. To do so means cooperating with the evil doctors who want her to seduce and manipulate Griff.  She likes and is drawn to the man with the strange chocolate wings, but she can’t let that attraction distract her. Her sister’s fate is in her hands.

In the last eighteen years, life hasn’t been easy for anyone.

The WS and the ES have been separate entities, but once the Veil was crossed, things began to evolve. It’s a new world, but that doesn’t mean it’s going to get easier anytime soon.

One response to “Review: Allied In Flight by Christi Snow”