Posted May 9, 2016 by B. in Paranormal Romance, Rating B, Reviews Tags: Bs-review, Heart of the Wolf series, Sourcebooks, Terry Spear 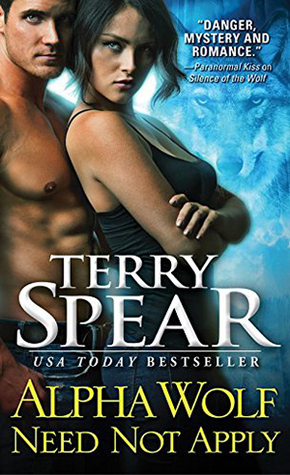 After the death of his first mate, Eric Silver never wanted to fall in love again. Since returning to the Silver Town pack with his brothers, he’s been content to do whatever needed to be done, work as a park ranger, and keep to himself. But, when the trail of a new group of wolves running a marijuana-growing ring leads him to the gorgeous she-wolf in charge of her own pack, things heat up fast. And Eric is surprisingly fine with the fact that his world has just been turned upside down.

Being the leader of a wolf pack is a tough job for anyone, but Pepper Grayling has the added frustration of having to fend off the unwanted attentions of male alphas who think they can take over because she’s a female. But, she’s not about to surrender her pack to anyone, and isn’t interested in ever mating again. Still, she can’t deny that the sexy forest ranger who is suddenly in her life is different, and that letting herself love might be better than she could have imagined.

This story was fun in quite a few ways, starting with the title. While all the characters in the Heart of the Wolf series are strong and capable, this is the first time I remember there being a pack led by a single female wolf. Pepper is formidable, and has held her pack together on her own just fine, which I liked a great deal. Though it was nice to see her enjoy some romance with Eric, I got the impression that she could continue to be the sole leader without flinching. The added side effect of knowing that her relationship with Eric was a conscious, deliberate choice, rather than a case of her not being able to resist his charms, was refreshing.

Even though there’s no denying the attraction between Pepper and Eric, I liked their ongoing independence. Even after Eric admits his desire to become Pepper’s mate, he respects her need to go slowly. They challenge each other, yet, at the same time, compliment one another’s abilities while providing a much-needed secondary perspective. Once they begin to indulge their mutual desires, however, they are very sweet together. Not to mention extremely sexually compatible, as well.

Like the other stories in this series, there’s an additional layer playing out beneath the romance in Alpha Wolf Need Not Apply. This time, the suspense surrounding the main characters occupies more of the story as a whole, and both Eric and Pepper are in the middle of things from the very beginning. I was able to guess some of the twists and turns along the way, but not everything, and getting caught up in the narrative was a lot of fun.

Alpha Wolf Need Not Apply was exactly what I expected from this series, but with a few twists that gave it a different, fresher quality. Pepper is impressive as a pack leader who’s been holding her own for years, and I found Eric to be just as enjoyable as an alpha wolf who doesn’t always need to have his way. The Silver Town Wolf stories are some of my favorites in the larger Heart of the Wolf collection, so I was glad to see more from them. With the addition of many new characters, I have high hopes that there will be more from this author for a long time to come.

Wolf shifter and park ranger Eric Silver is committed to his job policing spectacular San Isabel National Forest, and he’s hot on the scent of some mysterious wolves who are up to no good. When Eric’s investigation leads him to cross paths with forester Pepper Grayling, he’s fascinated to learn this she-wolf is her pack’s leader-strong, independent, and definitely not looking for a mate.

And This Time the Leader’s a She…

With unknown dangers on the prowl, Pepper is tempted to give in to her attraction to Eric and align her pack with his. But Pepper’s been pursued by many an alpha male out to take over her pack and gain her hard-won territory-and Eric is a born leader. How does Eric earn the trust of a she-wolf who’s been betrayed so often in the past?