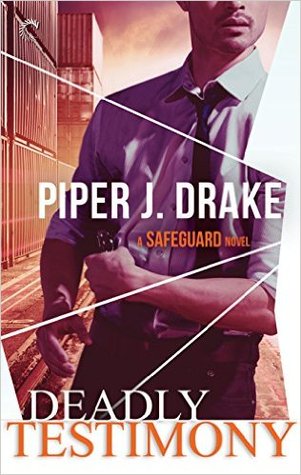 Gikany and Una liked this second novel in the Safeguard series.  Kyle and Lizzy are not the stereotypical couple in a military romance.  We enjoyed the honesty of their characters, their uniqueness, and their journey.

Kyle and Lizzy do not have the typical roles that one sees in military romance.  Kyle is the “damsel” in the distress while Lizzy is the hero.  We enjoyed this change.  We liked how Kyle, although trained in martial arts, was not a fighter in that sense.  He was vulnerable, and we appreciated seeing a man struggle with the stress of being hunted.  Likewise, Lizzy is a stone-cold killer – when she needs to be.  Although this facet of her job has taken a toll, she was still warm and kind.  The warring character traits in Lizzy made her human.  The contrasts between Kyle and Lizzy complimented each other and we loved the respect Kyle had for her.

For all of our enjoyment, we did encounter a couple of off notes.  We were slightly disappointed in the lack of background of Kyle. There was much about him that was alluded to, but not conveyed.  We understood his crimes, but not the full extent of his “badness”.  Don’t get us wrong, his selfish, egocentric ways lead him to being on the wrong side of the law, but he wasn’t inherently evil.  In fact, he was fairly noble and protective in his own ways, especially when he decided to clean up his act.  For all his faults, Kyle does try to do right.

The other item is something of debate between Gikany and Una.  Gikany thought that Lizzy’s PTSD was minimized. It was mentioned in the beginning but never truly addressed.  Una thought that Lizzy wasn’t suffering from PTSD but struggling with the after-math of doing her job, compartmentalizing the realities of her role, and the job that she does as a sniper.  Either way, we found Lizzy’s battle-harden persona compelling as she protected Kyle while also falling for him.

The plot of keeping Kyle safe from assassins was gripping. We liked the flow of the story and the rhythmic pace between the romance and the suspense.  Kyle and Lizzy were an intriguing couple and their honest, although quick, courtship and romance were mesmerizing.  Although the passion moved quickly, in the context of their roles, it was believable.  The bad guys have not completely been thwarted, but they certainly lost this battle.  We wonder what the Edict group will do next in their attempts to sabotage and undermine Safeguard.

We are not sure who will be the focal couple in the next novel.  We look forward to continuing the series.  If you enjoy romantic suspense served via militaristic style, you may just want to pick up the first novel.  Although they could be read as standalone novels, the books are far more enjoyable as an overall series.

Kyle Yeun didn’t start out bad and he doesn’t intend to end his life while on the wrong side of the law, either. His testimony to his former employer’s environmental misdeeds has earned him a protection detail compliments of the US government. But due to a dark international conspiracy Kyle was unaware of, his former employers have made ending his life a top priority. Realizing he needs more protection than the US Marshals can provide, he turns to Safeguard after seeing the beautiful, deadly Lizzy Scott in action.

One look at Kyle, and sniper Lizzy Scott knows this isn’t going to be an easy protection job. He’s arrogant, irritating and almost irresistible. Instead of being put off by her hardened attitude, Kyle seems to thrive off the challenge. And she’s slowly giving in to his charms.

After narrowly escaping the latest assassination attempt, Lizzy starts taking dangerous risks to keep him safe. But the last thing Kyle wants is another life ruined because of his actions. He found his redemption in Lizzy’s arms and he’ll risk everything to make sure they both make it out alive. As will she, even if it means walking away from him to keep him safe.