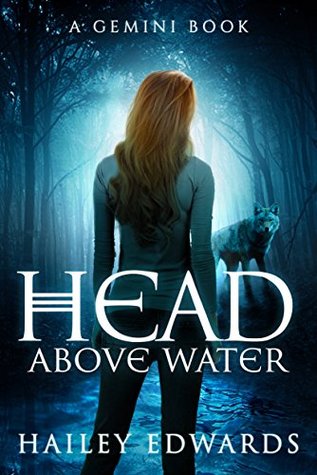 Head Above Water is… awesome. I was really excited to get back to Cam and Graeson. Their story is compelling, wrought with sexual tension, and contains a twist in their romance I did NOT see coming!!! The over-arching series conflict with Charybdis continues to build and puzzle Cam, as well. I may have devoured this title in one sitting, had life not happened.

I love the theme of ‘family’ in this title. Part of what we get to see involves Cam, Aunt Dot, and Cam’s cousin, Isaac. Blood relatives. The family dynamic is unique, and also draws parallels to a more traditional family structure. We also catch a glimpse of the Warg pack structure, which is also family. These opposing dynamics change and evolve through the story, and at the end I was left with this: family are those people who love you unconditionally, and always have your back. Not necessarily blood, but they can be. Pack, however, has its own set of rules. I wasn’t a fan (just because I didn’t like what happened, and it ticked me off on Cam & Graeson’s behalf), but they certainly propelled the story forward and added another layer to the conflict.

I liked learning more about Dell in this title. I’m not sure exactly where her character is headed, but her tenacity, fierce loyalty, and her loving nature are definitely something to watch in future Gemini titles. Isaac got more page time, too. We learn about him and his thoughts about Gemini using their magic. He seems like he wants to connect with Cam, but doesn’t know how—like there’s this big chasm between them since she lost her twin. We got to see some members of the Warg pack, too. Their Alpha, Bessemer, is not on my list of favorites. His…consorts (yeah, I’ll use that word…) aren’t up there, either. By design, the Alpha was bossy as all get-out, and implemented archaic practices that were dangerous, and—to me—seemed uncaring and steeped in tradition, versus taking the health of the pack into consideration. Typical of pack structure dynamic/hierarchy. And, we get to see Thierry and Mai. 🙂

Grief does strange things to people. Support systems are super important. When there’s a breakdown in supports, it does wacky things to a person. In the first Gemini title, Graeson’s sister, Marie, was missing and found dead—a victim of Charybdis. As the hunt to find her killer continues, Graeson is derailed in a very unsettling way by pack he trusts…at least to a certain degree. He spends a chunk of Head Above Water in his wolf form. What I really liked about this part of the story was the way he could still communicate with Cam. And the way his wolf behaviors reminded me of my own pets. They’re way more human than we admit, and it’s not a secret that animals have a way of soothing and just knowing what’s up. However, while in human form, Graeson had my favorite lines from this book:

“I do believe that sometimes—whether it’s fate or accidental—we cross paths with someone who shatters us on a fundamental level and remakes us into a better version of ourselves… Love is a series of small hurts… Even when everything goes right, your heart gets bruised.”

Did you swoon? I know I did.

Still, throughout the entire title, even when she’s being totally badass, I have all the feels for Cam. It sucks when you have that incomplete feeling—like there’s more out there for you. Some might say that’s the direction our society is heading; we feel restless and unfulfilled, we don’t have any ‘stick with it’ anymore. In so many ways, society is nomadic like Cam and the rest of the Gemini. Finding that niche—where there’s lasting fulfillment—is elusive and sometimes it seems like we’ll never find it, but in reality it’s right around the corner. And much like Cam, when we find it? Grab on with two hands, dig in your heels, and don’t let go. Cam is a bit of an enigma for me, but not really. Part of who she is speaks to me in a way 25-year-old me would have appreciated, but not as fully as almost-48-year-old me. That whole hindsight thing, you know. She’s dedicated to her profession—so much so that she’s willing to risk it all by continuing even when she’s suspended. She’s learning how to let people in, because—other than her family—she cares about someone(s) who aren’t family for the first time in her life. I’m a little jealous of Cam—she learns what she wants and how she wants to be treated before she goes after it. That’s just one of the reasons why I adore her character.

Readers are going to want to make sure they’ve read the first Gemini title, Dead in the Water before taking on Head Above Water. Due out July 30th is the third title in the series, Hell or High Water. I may block out a reading day in my schedule. Can’t wait to see what happens next!

Camille Ellis has tracked many killers during her career, but this time it’s personal. Cut off from conclave resources, she won’t let a small thing like a suspension keep her from accepting Cord Graeson’s offer of help.

Pretending to be mated to him is one way to secure allies, but the best that can be said of the Chandler Pack is they haven’t killed or eaten her. Yet. Between the alpha’s displeasure and the pack’s distrust of fae, she’s working overtime to keep her head above water.

Just when the fur starts to fly, a tip cracks her case–and her life–wide open.

3 responses to “Review: Head Above Water by Hailey Edwards”