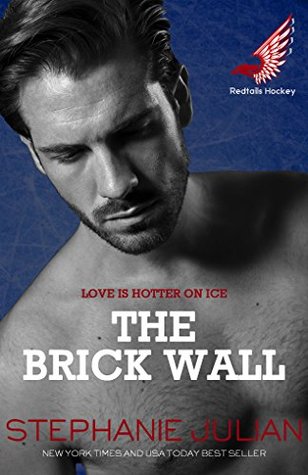 Shane “The Brick Wall” Conrad plays goalie for the Reading Redtails hockey club. He’s going though a rough spot and decides to stay in Reading for the Christmas holiday rather than head home to Minnesota to see his family. Even though he didn’t want to go out, he decides to take up assistant captain Cary Lenville’s offer to join his family and friends for dinner. Although once he arrives, he realizes he can’t leave soon enough, as long as Bliss is at his side.

Bliss Vescovi loves her life in Reading, close to her job and family. She watches over her special needs adult brother and helps her aunt run a popular bridal boutique. Even though her own wedding fell apart two years ago, she still loves helping brides-to-be find the perfect dress. Bored and restless at friend Lori Lenville’s party, she’s ready to go until the gorgeous Shane Conrad enters the room. Bliss wants some one-night action, and when she sees Shane enter the party, she decides he’s the one for the job.

The Brick Wall is the first book in Ms. Julian’s new Redtails Hockey contemporary romance series. The book does a great job creating the setting and filling in the world with likable, interesting characters.

Individually, and as a couple, I liked Shane and Bliss. They are both strong people who aren’t afraid to go after what they want. Yet both are slightly vulnerable and worried about getting hurt. Each is very kind and sweet, with just enough naughty, providing for some extremely steamy scenes. I did feel that their initial encounter was a bit over the top with respect to Shane’s insta-lust reaction to Bliss and her voice, but once that first night was over, I found the reactions more even-keeled and less hokey.

As much as I enjoyed the characters and their romance, I wanted more. I don’t know if this book is indicative of the series to come, but it was short. Too short. The author uses elapsed-time sections, with several weeks passing by with just the proverbial turn-of-the-page. I wanted more time getting to know Shane and Bliss and seeing them together outside the bedroom. Additionally, I was frustrated with the jump in time towards the end of the book, when I think there was no communication between Shane and Bliss (I was a little confused at this part).

The Brick Wall is a sensual, quick, entertaining read, with a solid romance developing after an initial first lust. I liked Shane and Bliss, and the romance felt real and believable. However, I felt that the story was too short, and I didn’t like the lapses in time. Overall, I like the premise and look forward to more stories in the series.

Redtails Hockey goaltender Shane Conrad had been having a great year…until recently. His slump couldn’t happen at the worst time. He needs to get his head in the game, not find a woman to screw with it. Until he meets Bliss Vescovi. She’s the perfect distraction–hot as hell in bed and smart enough out of it to realize their affair will end with the season.

Bliss isn’t looking for a commitment, especially not from an intense, driven man used to control. Her ex’s need for control had nearly made her his emotional slave and she’s sworn she’ll never give another man that kind of hold over her again. But a one-night stand with a hot hockey player who won’t be around forever? Totally doable.

Until Shane’s off-beat humor and killer smile get around the guard on her heart. And Bliss’s open warmth makes him believe the game might not be everything there is in life.

When Shane gets called up to the NHL, Bliss believes she’s found the perfect way to break up. But Shane’s nickname isn’t Brick Wall for nothing. He won’t go down without a fight because he knows, no matter where he is, Bliss belongs at his side.

4 responses to “Review: The Brick Wall by Stephanie Julian”