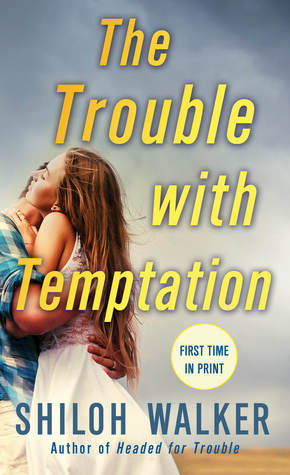 I have been waiting for this book. I needed to know what was going to happen with Brannan and Hannah. If you haven’t read the first title in the series, Headed for Trouble, you should get on that. The Trouble with Temptation picks up where the first title in The McKays series leaves off.

Ms. Walker’s writing is engaging and drew me in from the start. We’re immediately dropped back in the world of the McKays, with our focus on Hannah and Brannan—who were introduced in the previous title. There are innumerable examples, but one of my favorite passages was Hannah’s description of Brannan at the beginning of Chapter Six:

He was too beautiful.

Even after the past few days, Hannah was hard-pressed to come up with any other summation of Brannon McKay.

She wasn’t talking about his physical appearance, either, although he sure as hell didn’t lack for that, either.

Everything about him was larger than life.”

What we learn through the course of this title is that Hannah has amnesia and doesn’t remember the stuff at the end of the previous title. Even when she doesn’t trust herself, as a reader, I find myself rooting for her. She’s not the whiny, take-a-backseat-to-a-powerful-man woman. Nope. She knows she’s got this on her own—even pregnant. She keeps her independence through times that are *ahem* less than fun, and maintains a sense of self even when things are going well. She’s frustrated at all the right things, and while I’ve never experienced amnesia (lucky…there’s times I’d *like* to forget things…), but I hope I’d be the same. I really adore Hannah and the way her character develops and grows through this part of the series arc.

Now. Brannan. If ever there were a rich Alpha male, Brannan is probably the poster child. He doesn’t throw his money around, but he doesn’t deny he’s got it, either. It’s just a part of who he is. While there’s some skeletons hanging in his closet, regarding Hannah, he really is the perfect person for her. He just isn’t secure enough in himself to ‘come clean’ with some details.

I think a BIG part of what drives the plot of The Trouble with Temptation is the suspense aspect of the plot. Introduced in the first title of the series, there’s some trouble afoot, dear reader. And noooo… it’s not resolved by the end of this title. I have my theories, though. And the next title—seriously, if Moira & Gideon don’t hook up, I may have a hissy fit—The Right Kind of Trouble, can be available any second now.

Love is the greatest risk of all.

After seven days in a coma, Hannah Parker remembers nothing about the accident that landed her in the hospital–or how she ended up pregnant with Brannon’s baby, the man she’s loved since high school. Her body and heart have burned for him for years, and when she wakes up, he’s sleeping by her bedside, anxious to keep her safe at all costs. But as Hannah struggles with her amnesia, a threat looms closer–one that could have deadly consequences if she recovers her memories. She will have to trust Brannon completely if she is to keep what haunts her at bay…and their baby safe….

Brannon McKay spent the last ten years fantasizing about Hannah. In his mind, he’s explored every passionate scenario he can think of while, in real life, Brannon took their budding relationship and threw it away with both hands. Hannah doesn’t remember what happened but, now that she is awake, Brannon would rather die than watch her walk away again. When Hannah and his unborn child’s life is threatened, Brannon must stake claim to the woman who has held his heart captive for years…or risk disaster tearing them apart…

Reviews in the Series:
Headed for Trouble by Shiloh Walker (The McKays #1)

2 responses to “Review: The Trouble with Temptation by Shiloh Walker”