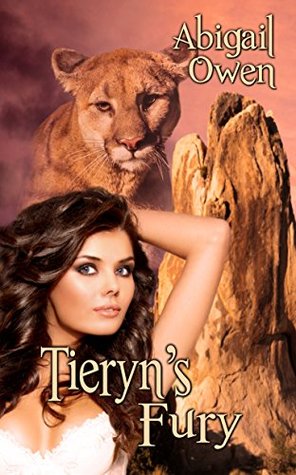 Tieryn’s Fury is the third novel in the Shadowcat Nation series.  Although we enjoyed the couple’s journey in this installment more, the mythology takes a bit of a turn.

The Shadowcat Nation series is a fascinating paranormal romance series.  The series centers on mountain lion shifters with wolf, bear, and other animal shifters in the background.  Some of the shifters possess an additional special ability, such as the ability to heal or see the future.  They are rare and therefore protected.  The mountain lion shifter coalition has agreed to only allow each dare (community) to only have one of these special shifters each.  These shifters are cosseted, but their freedom is quite limited.

Tieryn is one of these shifters: she has the ability to heal.  We appreciated her stubbornness and drive.  We enjoyed her journey with Shane.  We were intrigued when we were first introduced to this disfigured shifter in Andromeda’s Fall and we wanted to know more about him.  Tieryn and Shane are a good match and the give and take between them was gripping.

We were astounded by what we learn about Charles – the odd shifter from the Bear dare.  His background opens up a new aspect to the world, one we are not sure about.  As each book slowly divulges more about the mythology, we aren’t sure where this element will lead.  We look forward to learning more and seeing how this really does fit into the overall world.

The escalation of the overarching conflict reaches a pinnacle in this novel as we learn the reasons behind it.  It is shocking to find out who is behind the war and why this war is being waged, but we enjoyed this storyline.  Although the overt fighting may have eased, the war continues.  We are eager to see how this plays out in the next novel.

Overall we liked Tieryn’s Fury.  The journey of Shane and Tieryn was captivating.  The revelation of the lead antagonist was gripping and we look forward to the continuing overarching plot line.  Although the mythology opened up in a strange way, we are intrigued by it and looking to learning more in the next installment.

The day Shane Callahan lost his wife and was forced to run from the only home they’d ever known was the day he’d vowed he’d kill every last man responsible. He’s waited years in hiding, but is finally on the verge of taking his revenge. Until he is assigned to protect a Healer and is forced to halt in his quest.

As the Alpha’s daughter and the Healer in her Dare of mountain lion shifters, Tieryn McGraw has enjoyed a privileged life. As the fiancé of the next Alpha in line, she expects that to continue. But then she ends up on the run with a man determined not to like her…and who makes her question everything about her decisions and her future.

Shane needs her to heal more than his body. But can Tieryn heal his soul and prove to him that love is a higher purpose than revenge?