Today I have Pip Ballantine and Tee Morris, the authors of one of my favorite series, here on the blog to celebrate the release of The Ghost Rebellion, book five in the Ministry of Peculiar Occurrences series. The series features agents Eliza Braun and Wellington Books, and their action-filled adventures. I thought it’d be fun to find out some of Eliza’s more interesting adventures that have not been highlighted in the series. Please help me welcome Pip and Tee to That’s What I’m Talking About…

5. I love Paris, so when I got a chance to join my partner at that point, Harrison Thorne in a bit of investigating, I jumped at it. We were having a spot of bother with Marquise de Savoie, but the surroundings made up for it. It also happens to be one of those missed opportunity moments, but you can’t always be looking back, can you? I still love Paris.

4. Wellington and I had an unusual callout one Christmas. I am not a fan of ghosts, but they do seem to pop up around the holidays. Anyway I did get to try out some new armaments from R&D, though the old man who called us was not very pleasant. Still I would rather be on assignment with Wellington than sitting around eating Christmas pudding.

3. Don’t tell Bruce Campbell this, but he does make my list…well at least our very first case together does. It was in Melbourne one of my favourite cities in Australia. Although he isn’t my preferred agent to work with, we managed to have some fun, tracking down some House of Usher agents embedded in the city. Oh and there were trains…I love trains.

2. Back in New Zealand, woman were fighting for the right to have a vote. Naturally I was on board with that, but not everybody was. The outcome worked out in the end, but it was a bit hairy for a while. Still we had a nice car ride, and a bit of a fight in a burning building.

1. My favourite happened in Egypt actually. At first we were sent to Cairo to do some collection of records for the archives. It didn’t start off well, but through a fortuitous turn of events, we were soon investigating the mysterious ancient silver coins that were causing people to act in homicidal and suicidal ways. I had been in Egypt before, but this journey turned out to be quite different. While it was nice having Wellington at my side, what really turned out to make it one of my favourite adventures had to be the camels. Yes, people give camels a bad rap, but I tell you, mount a Gatling gun on each side, and they are remarkably fun.

Find out about our latest adventures in the fifth book of the Ministry of Peculiar Occurrences, The Ghost Rebellion. 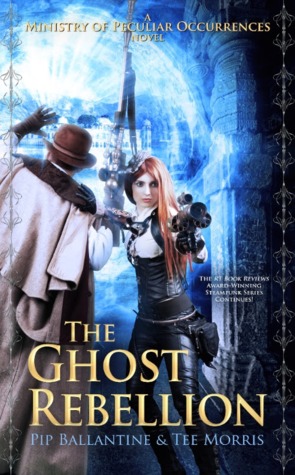 The chase is on! After rescuing Queen Victoria from the clutches of the Maestro, Agents Eliza D Braun and Wellington Books are in hot pursuit of Dr Henry Jekyll. While he continues his experiments on the aristocracy of Europe, he leaves a trail of chaos and despair in his wake. However when Eliza and Wellington run him to ground in India, they are forced to come face to face with ghosts from the past, and the realities of empire.

Meanwhile Ministry agents Brandon Hill and Bruce Campbell travel deep into Russia hunting down a rare ingredient to save Queen Victoria’s life. Amid the cold they uncover a threat from the revitalized House of Usher that comes directly from their new Chairman.

All in the Ministry of Peculiar Occurrences will find their allegiances in question, and their mettle tested as a new dastardly era of international intrigue dawns.

Buy in print : Buy a signed copy direct from the authors

Direct from the Ministry : Amazon : Kobo : Smashwords : Barnes and Noble

An Extract from Chapter One of The Ghost Rebellion

The mad lord was now grabbing random tables and unsuspecting passengers and tossing them behind him. Hurling gentlemen, Wellington could not deny, was a very effective distraction. Eliza managed to sprint a few paces ahead, and with one hand she pulled at the waistband of her lovely skirt, one jerk, buttons flew and it billowed and flew away. Eliza was very hard on her fashion, but he had gotten rather good at sewing buttons back on.

Then sliding across the polished wooden deck, she came to an abrupt stop at an overturned table, drew aim with the Mark IV, and fired.

Lord Featherstone lurched forward, and for a moment it looked as though he might tumble to the deck. Instead, he stopped and snorted like a bull considering the amount of force needed to charge.

“Bugger me!” Eliza ejected the shell and worked the bolt back to a firing position.

“Have you got a full charge built yet?”

Eliza glanced down and shook her head. “Still working up to that, love. Considering the first shot only winded him, a half-charge might just twirl his moustache a bit.”

Wellington brought up the experimental, its energy pulse out-flashing the sunlight around them. “Then I guess we don’t have many options, now do we?”

“You can’t be serious?” She sounded both shocked, and a little aroused.

“If you come up with an alternative strategy in the next five minutes,” he said, continuing forward, “you will know where to find me.”

The closer he got to Lord Featherstone, the more he tightened his grip on the experimental, hoping it would still the tremor in his hands.

“Cute little toy you got there,” growled Featherstone. “You and your lot must have some right smart clankertons on the job.”

Actually, they dance the line between genius and lunatic quite deftly. “We must be prepared for anything we encounter in the field, present company included.”

Featherstone’s chuckle sounded like stone rubbing against stone. He was hoping to maybe calm Featherstone and relax him to a point to where Jekyll’s serum would lose some of its impact. However, one look in the monster’s eyes told him that the Doctor’s hold was complete. Wellington chanced a look around; terrified passengers were huddled against the bow of the ship.

So it was to be a last stand.