Audiobook Review: Everywhere and Every Way 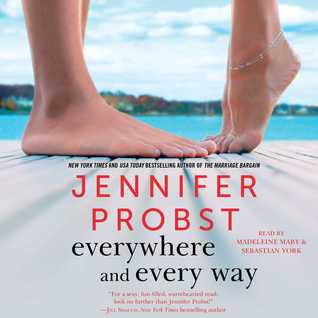 Caleb Pierce has lived under his father’s thumb, working for the family construction company, biding time until it is his turn to take over Pierce Brothers Construction. So when his father dies suddenly, Cal must convince his two estranged brothers to come home and help him with the business or face losing everything.

Morgan Reins is a self-made interior designer for the stars. She has what it takes and does whatever needed to get the job done. Now that her A-list clients want a custom home in Caleb’s little town, she knows that Pierce Brothers is the only company for the job. Convincing Cal to take on her project will test her limits.

Everywhere and Every Way is the first in a new series and my first experience reading a Jennifer Probst title. I enjoyed the light-hearted, small town feel of the story and got wrapped up in Morgan and Cal’s relationship. Generally, I liked both Cal and Morgan and found their romance, once it kicked into gear, sexy and fun. Their individual struggles were realistic and intriguing. I especially liked watching each deal with his/her demons and troubles, and finally coming through on top in the end.

My biggest complaint about the title is that it just took way too long for Cal and Morgan to finally connect. At well past the halfway mark in the book, I found that while I liked the story, I was having trouble getting into the relationship because Morgan was working so hard not to have one. There were no sparks or steam. They had shared one kiss, and I was annoyed with the lack of progression, as well as some silly, unnecessary side stories. Yet once the connection was made, sparks flew, and I was completely engrossed in both the romance, as well as the efforts the Pierce brothers were making towards reconciliation.

Everywhere and Every Way is mutually narrated by Madeleine Maby and Sebastian York, with Ms. Maby covering the sections told from Morgan’s POV and Mr. York performing the sections shared from Cal’s POV. Overall, the narration as okay. I liked Mr. York’s performance slightly more than Ms. Maby’s. I felt his heat and warmth suited Cal perfectly, while Mr. York’s voice for Morgan had a good edge of southern perfection. He was able to convey emotions a bit better than Ms. Maby. Meanwhile, Ms. Maby’s voice for Morgan was good but lacking real emotion. I felt she had the cold southern perfectionist down but not the rest. Her narration was enjoyable and easy to listen to, but I wanted more passion from her characters’ voices. I think her narration lead to some of the frustration I was experiencing during the first part of the book when everything was moving slowly.

Overall, I enjoyed Everywhere and Every Way, even more so after the sluggish start. I loved Cal’s toughness and his bit of alphaness, but that he was sweet and always ready to apologize if he made a mistake. I loved watching him fall in love with Morgan. Morgan was a bit tougher for me. She was cold and hard to relate to, and I wanted to get more from her at times. But in the end, she and Cal were a great match, and the story was both enjoyable and entertaining.

Ever the responsible eldest brother, Caleb Pierce started working for his father’s luxury contracting business at a young age, dreaming of one day sitting in the boss’s chair. But his father’s will throws a wrench in his plans by stipulating that Caleb share control of the family business with his two estranged brothers.

Things only get more complicated when demanding high-end home designer Morgan hires Caleb to build her a customized dream house that matches her specifications to a T—or she’ll use her powerful connections to poison the Pierce brothers’ reputation. Not one to ignore a challenge, Caleb vows to get the job done—if only he can stop getting distracted by his new client’s perfect…amenities.

But there’s more to icy Morgan than meets the eye. And Caleb’s not the only one who knows how to use a stud-finder. In fact, Morgan is pretty sure she’s found hers—and he looks quite enticing in a hard hat. As sparks fly between Morgan and Caleb despite his best intentions not to mix business and pleasure, will she finally warm up and help him lay the foundation for everlasting love?

7 responses to “Listen Up! #Audiobook Review: Everywhere and Every Way by Jennifer Probst”