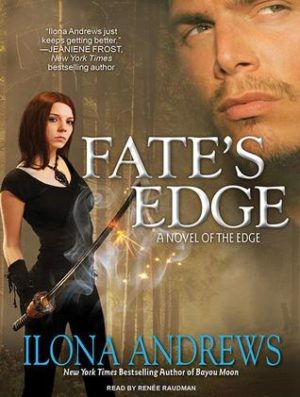 The third Edge story, Fate’s Edge, features Kaldar Mar, the swindling, grifting cousin of Cerise, the previous book’s heroine. The story is set two years after the second book, with Kaldar working for the Adrianglian spy network, the Mirror, hoping to exact revenge on Spider and the Hand for killing his family. He’s been recruited to recover a valuable stolen artifact, which should give him the opportunity for which he’s been waiting.

Audrey Callahan wants to live a normal life, working for a PI firm in the Broken and maintaining a small home in the Edge. After living a life filled with heists and disappointments, she’s left her family behind, for good. However, when her dad shows up and requests her help in “one more big job” she gives him a choice: he can either walk away and keep her as a daughter or she’ll do the job and he will no longer have a daughter, killing him if he returns. Her dad picks the heist over his daughter. Now the Hand is after her to recover the artifact, and she doesn’t know who she can trust.

I am throughly enjoying my time in Ilona Andrews’ Edge. The mythology is unique and interesting, and with each passing book, the plot expands and deepens. While each story is a standalone romance with its own adventure, there is an overall urban fantasy arc. Although new characters are introduced in each title, previous characters are brought forward and sometimes play key roles.

Kaldar and Audrey’s story is genuinely fun, although at times confusing and complex. The pair are con artists, working both the enemy to gain back possession of the stolen artifact, but also with each other. They play games, hiding their true feelings in an effort not to get conned and hurt. While on the surface, the plot of retrieving the items Audrey helped steal seems simple, the overall story is anything but. At one point, the pair had to steal money from a pirate to get in good with the preacher, so that they could rob him and exchange that item for an invitation to the bad guy’s auction, in order to get back the item stolen in the first place. *phew* I became tired of all of the layers of subterfuge. Yet, once the layers began to peel away, the story at the core was rather intense and exciting.

The shining star of the entire experience is the narration of Renée Raudman. She excels at making the story come to life, giving each moment the appropriate amount of emotion and excitement. Her performance is what made even the most frustrating moments enjoyable. She brings forward the same familiar voices of beloved characters, while giving each newcomer his or her own unique voice.

Fate’s Edge, like the previous stories in the series, is a wild, exciting adventure, shared from multiple point-of-views and wrapped in layers of intricate detail. While the book suffered a little under the weight of its own rather lengthy tale, the story is interesting and the narration perfect. While I would classify the book as a romance, it is light and not the primary focus of the story. In the end, I enjoyed the book and look forward to finding out how the series will wrap up in the next title.