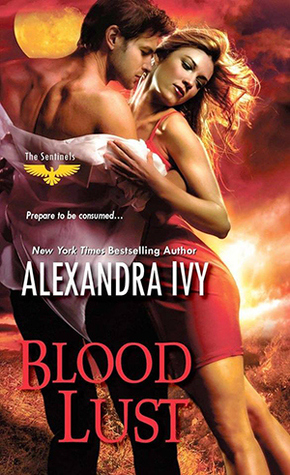 Continuing directly from the storyline of the previous book, Blood Assassin, Bas must deal with the outfall of his daughter’s, Molly, kidnapping by supernatural forces. The events ruined his business, and he ended his roll as the leader of a renegade band of mercenary high-bloods. All he wants to do now is raise his daughter in peace, but that all changes when Molly’s mom, Myst, reenters their lives.

Myst had a one afternoon affair with Bas which resulted in a pregnancy. Leaving Molly with Bas after her birth, Myst has been in hiding and impossible to locate. Unknown to Bas, Myst has stayed in contact with Molly via telepathy, and promised Molly she’d come visit after the horrible ordeal. Now that Myst is back, Bas won’t let her go.

While you don’t need to have read the previous books in the Sentinels series to enjoy Blood Lust, the story arc started in the second book, which provides much of the background needed to better understand the high-blood mythology. I enjoyed reading Blood Lust and found the story easy to follow and straight-forward. Myst and Baz’s relationship had its bumps, but overall flowed smoothly. Their albeit brief shared history lends itself to a sexy reunion, fueled by the fact that Bas has longed for and searched for Myst ever since their one shared afternoon. I enjoyed watching the couple rekindle their feelings and act on their desires. I especially liked how open and honest Bas was with Myst, especially with his desires.

While the romance was engaging, I had a few troubles with the suspense/action part of the story which involves the Brotherhood, a high-blood hate group populated by human fanatics. Unfortunately, the group felt like a stereotype of cliched cults. I also felt some of the scenes were too easy, with convenient weapons and perfectly timed coincidences. Additionally, I would have loved it if the part of the story I found most intriguing, having to deal with Molly herself, was explored more.

Honestly, my favorite parts of the book had to do with the ongoing denial of Lana and Wolfe as they push the limits of their mutual desire. Ms. Ivy is building a wonderful, über-steamy relationship that drips with sexual tension. I want their book… I want to know more about their paths and how they can work out an HEA.

In the end, I enjoyed my time spent in the world of high-bloods and Sentinels. Ms. Ivy has developed an interesting mythology, which I plan to explore in subsequent titles. Blood Lust is a good addition to the series, but it’s another couple’s romantic journey I long for.

Blessed and cursed by their hidden abilities, the Sentinels have no choice but to live, and love, on the edge of humanity…

The Sentinel assassin, Bas, is facing the greatest challenge of his outcast existence. His young daughter, Molly, has been kidnapped. But her disappearance has brought the return of her mother, Myst, whom Bas has never forgotten–or forgiven.

Haunted by a vision that she’s destined to create a weapon that will destroy thousands, Myst was never impulsive–until she met the irresistibly handsome Bas. But with the Brotherhood, the enemy of the high-bloods hunting for her, Myst had to stay on the run, to keep her child, and the world, safe. Now, with the most important thing in both their lives at stake, she and Bas must embark on a treacherous journey to save Molly, to confront the truth of Myst’s fate–and to face their fierce desire for one another.