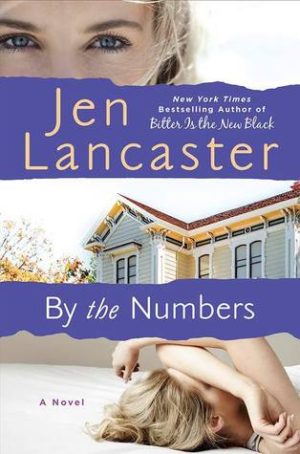 By The Numbers
Author: Jen Lancaster
Reviewer: Nima
Rating: B-

I was attracted to By the Numbers because I have arrived in the sandwich generation and my older brother is an actuary.  Main character Penny Sinclair is an actuary at the highest fellowship level who’s ready to move on from a painful divorce and embrace being an empty-nester.  Her parents and her children have other plans and issues with appropriate boundaries.  For those of you who don’t know what an actuary is (we had to look it up when my brother came home from college and announced that’s what he wanted to do with his life,) it is someone who analyzes the financial consequences of risk.  They are calculating ninjas.  This kind of work is especially cogent to the insurance industry where most actuaries are employed.  They are the ones who figure out how long you’re going to live. Becoming an actuary is a brutal process.  They sit for multiple, lengthy exams twice a year.  Each exam is like taking the bar and the process can take anywhere from six to ten years to complete.  They make pretty good money because, yeah, math.  We have a family joke that actuaries are the people who didn’t have enough personality to be accountants.  We can say that because my father is an accountant and truthfully, they both have a great sense of humor.  So my interest was piqued to see what Lancaster would do with a female actuary.

Penny’s character borders on being a stereotype, but really, since so few people know what an actuary is, I’m not sure the word “stereotype” really applies.  The average reader will see her as financially obsessive compulsive.  She studies statistics and plans accordingly.  She reminded me of my father who, trying to plan for every possibility, actually budgeted for both he and my mother to get one speeding ticket the first year they were married.  The preparedness thing is probably Penny’s most endearing quality. This is how she does her best by her family.

The book opens with emails going around among Penny’s family members about the upcoming wedding of her daughter Kelsey.  They are snarky and even rude. Penny’s own mother is described as a “lesser Disney villain.”  I very nearly DNF’d the book because there was no way I could trudge through an entire novel of these self-centered brats.  Thankfully, we got to Penny’s narrative fairly quickly and she found them as insufferable as I did.  Sadly, Penny was also a woman scorned so that colors her perspective, no matter how pragmatic her nature tends to be.  She is hurt and wounded.  Even though she’s justified—her husband decided to have an affair with a woman half her age, in their home—Penny is angry.  The reader wants her to move on as much as Penny does.  She’s trying, but family continues to hold her back.  She’s even made to endure the presence of her ex’s girlfriend at the wedding when she single-handedly saves the day from multiple crises.  It makes her very hard to hate on Penny’s behalf.

The reader should know going in that this is a family dealing mostly with “first world problems” as much as they are with timeless family problems.  It wasn’t a fast read for me because I had to be in the mood to pick up their issues and could only read so far before I had to put them down again.  Lancaster’s writing style in By the Numbers is meant to be witty and sarcastic. Unfortunately, the sarcasm has real bite.  It’s the domestic humor of Erma Bombeck with none of the warmth. To me, it actually felt quite raw. By the time I got the end, which does wrap up all the storylines satisfactorily, I still felt bruised.  I liked it, but it wasn’t an easy, breezy read.

Actuary Penny Sinclair has a head for business, and she always makes rational decisions. Knowing that 60% of spouses cheat and 50% of marriages end in divorce, she wasn’t too surprised when her husband had an affair. (That he did so with a woman their daughter’s age? Well, that part did sting a bit.) She just made sure she got everything in the divorce, including their lovely old Victorian house. And as soon as her younger daughter has her hipster-fabulous wedding in the backyard, she’s trading it in for a condo in downtown Chicago…

Well within the average market time in her area, Penny gets an offer on the house. But then life happens. Her children, her parents and her ex come flying back to the nest, all in need of Penny’s emotional—and financial—support. Spread thin, Penny becomes the poster child for the “sandwich generation,” when all she really wanted to do was make managing director, buy a white couch, and maybe go on a Match.com date…

One response to “Review: By the Numbers by Jen Lancaster”