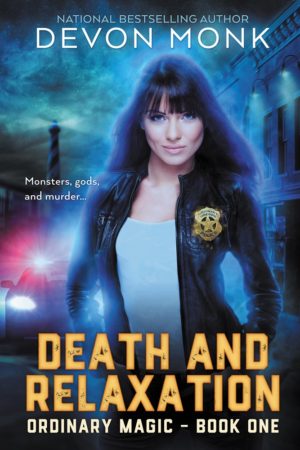 Death and Relaxation is a new urban fantasy series from Devon Monk.  It has down-to-earth characters, humor, mystery, and action with a splash of romance.  What’s not to like?

This is a fascinating world with a mix of mythologies.  In the small town of Ordinary, Oregon, gods and monsters secretly mix with mortals.  The mortal Police Chief, Delaney Reed, is in on the secrets since it’s her job to police both groups while keeping mortals unaware.  Although the monsters live as part of the community, the gods are only there for a vacation.  However, a vacation for a god can last decades.  There is so much to this world and we’ve only been given a taste.

Gikany and Una really enjoyed this first glimpse into the world of Ordinary Magic.  Although some of the themes can be quite heavy, the humor and banter lighten it up.  You don’t want to miss the Rhubarb Concoctions judging scene (it is hilariously funny). We laughed out loud many times while reading this novel and we found it difficult to put down.  Death and Relaxation was a quick read since we were equally engrossed in both the detective drama and in Delany’s love life.  Delany shares a rich camaraderie with both her family and with the gods and monsters of the town.

Although there is some foreshadowing, the ending has a few surprises.  Delany may not have been able to connect all the pieces as quickly as we did, but considering how full her plate is, and how new she is to the job, it was understandable.  Her humanity was a refreshing contrast to the paranormal backdrop.  The mystery of the murder and its ramifications are resolved at the end, but we are left with some interesting questions about Ryder.  We also cannot wait to see how Death enjoys his vacation and want to learn more about the mythology of the individual monsters.  This series has staggering potential.

Death and Relaxation is a strong start to what could be a quirkily fun and fascinating new series.  We loved the world that Ms. Monk has created: one that is rich in nuances and is bursting with humor.  Gikany and Una look forward to the next novel in this series, Devils and Details due out in July of this year.

Police Chief Delaney Reed can handle the Valkyries, werewolves, gill-men and other paranormal creatures who call the small beach town of Ordinary, Oregon their home. It’s the vacationing gods who keep her up at night.

With the famous Rhubarb Festival right around the corner, small-town tensions, tempers, and godly tantrums are at an all-time high. The last thing Delaney needs is her ex-boyfriend reappearing just when she’s finally caught the attention of Ryder Bailey, the one man she should never love.

No, scratch that. The actual last thing she needs is a dead body washing ashore, especially since the dead body is a god.

Catching a murderer, wrestling a god power, and re-scheduling the apocalypse? Just another day on the job in Ordinary. Falling in love with her childhood friend while trying to keep the secrets of her town secret? That’s gonna take some work.

6 responses to “Review: Death and Relaxation by Devon Monk”