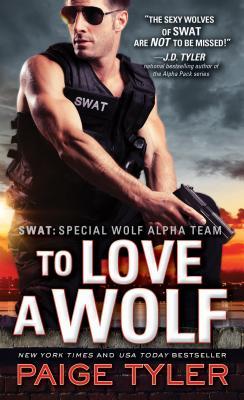 To Love a Wolf
Author: Paige Tyler
Reviewers: Gikany and Una
Rating: B

To Love a Wolf is another satisfying installment in the SWAT series.  Gikany and Una have liked Cooper since we met him in the first novel, Hungry Like the Wolf.  We were eager to see him meet his “One” and we were not disappointed, although the mythology took an unexpected turn.

Cooper and Everly’s story is a great change of pace from the previous stories.  Shortly after meeting Everly, Cooper rescues her (and a number of other victims) from bank robbers.  However, this is an isolated event, the overarching plot is the search for a bomber.  We really liked how Cooper and Everly met and courted one another.  Everly’s background gives a new twist to the mythology and an interesting obstacle for the destined mates.

At the start, the plot of the bomber is really on the back burner while the journey of Everly and Cooper is established.  As the novel progresses, the bomber becomes more prominent, but does not diminishment the romantic plot.  The bomber plot is quite easy to puzzle out.  The plot of Cooper and the bomber was only suspenseful in waiting to see if Cooper would figure it out and how it would all end.

With a new twist of the mythology, we wonder if our SWAT wolves will learn more about their natures and history.  Either way, we liked the journey between Cooper and Everly.  Their story, including the love at first sight during a bank robbery, was sweet. If you enjoy a little military/police drama with your paranormal, pick up the SWAT series – it’s good fun!  We recommend reading the series from the beginning since the mythology is slowly divulged through each novel.  One thing is for certain, we look forward to the next novel in the series.

HE’S FOUND THE ONE…

SWAT officer Landry Cooper is certain Everly Danu is The One. The problem is, she has no idea what Cooper really is. And as much as he wants to trust her, he’s not sure he can share his deepest secret…

When Everly’s family discovers Cooper’s a werewolf, her brothers will do anything to keep them apart-they’ll kill him if they have to. Everly is falling hard for the ridiculously handsome SWAT officer, and she’s not about to let her brothers tell her who she can love… Until Cooper’s secret is exposed and she discovers the man she thought she knew is a monster in disguise.

BUT CAN HE KEEP HER?

6 responses to “Review: To Love a Wolf by Paige Tyler”