Today, I happy to host one of my favorite people here at That’s What I’m Talking About… Please welcome Jeffe Kennedy who is here celebrating the upcoming release of Lonen’s War, the first book in her new fantasy romance series.

I’m not much of an architect.

By that I mean, so far as planning my books. That’s George R.R. Martin’s analogy. He says most writers fall in a spectrum, where the far end of architects have detailed blueprints planned ahead of time that are strictly followed, and at the other are the gardeners, who plant seeds and see what grows.

I might have some trellises and nicely laid-out flower beds. I love how a good arbor looks. But mostly I wait for stuff to grow.

When I set out to write Lonen’s War, I’d been saving those particular seeds for quite a while. I had an idea of my hero and heroine – the king and queen of enemy nations – who would come together in alliance. When I’d talk about it, my writer friends would inevitably ask things like “why are they at war?” and “what are they stopping by joining forces?”

I started with my heroine’s point of view, because I felt a stronger sense of who Oria might be. By looking through her eyes, I began to see the landscape she lived in – and those answers started coming.

Backing up a little, let me explain that the very first writing class I ever took was “Essays on Self and Place,” taught by a visiting writer to the university. It’s hard to say how serendipity works. That class happened to be available at a time (at night) when I could attend without impacting my graduate school coursework or related teaching, and coincided with my then brand new decision to try to become a writer. The subject didn’t matter so much – except that it totally clicked for me.

I lived in Wyoming at the time, had gone to college for four years in the Midwest (St. Louis), and before that had grown up in Colorado. Viewing myself in terms of place and understanding how landscape shaped my thinking unlocked something huge in me. It could be I had so much writing energy stored up that anything would have unlocked it and sent it in that direction. It could be I hit exactly the right thing at the right time.

At any rate, when I saw Oria’s desert, the sere plains, the carved sandstone and the wind-shaped spears of the towering rocks behind her city, I understood a great deal more about her and her story. More, I discovered the name of her city – Bára – named for the long, flat mostly dry bay with the lethal bore tides that divided her realm from others. I’ve been fascinated by bore tides since I visited Anchorage, where the water rushes up the long flat bay making a sound like thunder, going from one inch of water to shoulder-deep in minutes. The unwary cannot run fast enough in the bogging mud. I’d had an idea that Oria’s world had two moons, so it fell into place that the bore tides there would be even deadlier.

There is a great deal about Oria that’s shaped by her landscape – one that is at odds with Lonen’s Dru, a land of lakes and forests. They come from opposite worlds in every possible way.

Have you ever thought about it, how the landscape you come from or live in shapes you? 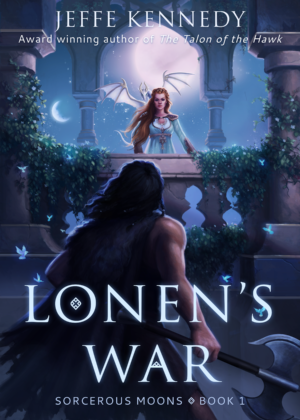 An Unquiet Heart
Alone in her tower, Princess Oria has spent too long studying her people’s barbarian enemies, the Destrye—and neglected the search for calm that will control her magic and release her to society. Her restlessness makes meditation hopeless and her fragility renders human companionship unbearable. Oria is near giving up. Then the Destrye attack, and her people’s lives depend on her handling of their prince…

A Fight Without Hope
When the cornered Destrye decided to strike back, Lonen never thought he’d live through the battle, let alone demand justice as a conqueror. And yet he must keep up his guard against the sorceress who speaks for the city. Oria’s people are devious, her claims of ignorance absurd. The frank honesty her eyes promise could be just one more layer of deception.

A Savage Bargain
Fighting for time and trust, Oria and Lonen have one final sacrifice to choose… before an even greater threat consumes them all.