Audiobook review: Then Came You 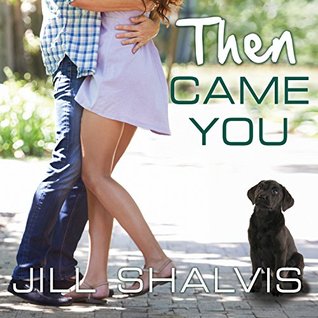 Doctors Emily and Wyatt had a one-night stand three months ago at a vet conference in Reno. Never expecting to see each other again, it was a bit of a shock when Emily discovers her new supervisor is that sexy man with whom she had an uncharacteristic affair. The revelation that Emily is Belle Haven’s newest intern is equally shocking to Wyatt, who refuses to let his heart be broken by someone with one foot out the door, again.

With each return to Sunshine, Idaho, I find myself more in love with the characters and stories of the Animal Magnetism series by Jill Shalvis. This delightful contemporary romance series follows the lives and loves of those who live and work in and around the town’s sizable animal hospital. In Then Came You, we witness two new characters who both work as vets for the Belle Haven clinic. Although both are (mostly) new to the series, the characters fit with ease into Sunshine’s close-knit group.

The story is almost the reverse of Kate and Grif’s story (Rumor Has It), with Emily having one foot out the door and ready to head back to sunny LA to work, live, and help care for her father. She’s got a plan, but it’s one that she thinks she should follow to find happiness. It takes Wyatt’s firm but tender romancing, as well as her sister’s blunt heart-to-hearts, to help her see that she needs to make room for her own happiness rather than do what she thinks is best for everyone else. Meanwhile Wyatt thinks he’s open and honest with Emily, but he’s holding back a piece of himself, unwilling to tell Emily just how much he cares for her. Wyatt didn’t have a say in being dragged all over the world by his jet-setting parents growing up, so Wyatt refuses to influence anyone’s decision on where to life. His misguided behavior was frustrating for me at times, but he and Emily were so good together, it didn’t bother me like it may have in other books.

In addition to the romance, the book had a semi-mystery that surfaced from time to time, giving the story added tension. Although I pretty much figured out the plot right from the get-go, I appreciated how the author worked it into the romance and that Emily was never a “too stupid to live” heroine. I also loved meeting both Emily and Wyatt’s siblings, which I’m hoping we’ll see more of in future titles.

Adding much to the story, Ms. White’s narration was enjoyable. I listened to the book at 1.5x speed, which worked well for me. Ms. White added the perfect amount of emotion into her performance, and I didn’t notice any similarities between voices like I had in past. The voice for Emily was determined and strong, yet sympathetic. Wyatt was firm and gentle, and sexy when called for.

Overall, I really enjoyed listening to Then Came You. The chemistry between Emily and Wyatt was both cute and sexy; I loved watching them fall for one another. I loved seeing Emily learn to accept herself and let go of things she couldn’t control. The darker storyline with the injured dogs was a little predictable but still a solid storyline. The book flowed smoothly from beginning to end. My only complaint is that the ending was a bit abrupt, as I really wanted more time with the couple after everything smoothed over.

My Rating: A-
Narration A-

8 responses to “Listen Up! #Audiobook Review: Then Came You by Jill Shalvis”