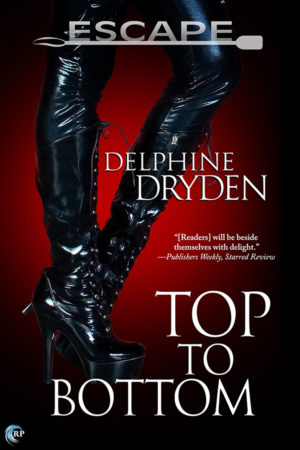 Mistress Amie lives day-to-day without attachments. She loves her job at the gym, but the only person she has any type of bond with is her ex, Mara, whom she’s sent away for good to a new club, Escape. She used to love the crowd and scenes at her current club, but now, the club just feels drama-filled and tired.

Dru is determined to make club Escape work. On her own, she seeks the advice of her onetime college partner, Amie, to help the club break even. What she didn’t expect is to have feelings for Amie, even after their initial reunion left little to be desired.

Top to Bottom is a love story of two women finding their way back to one another after many years. Although the years in between college and current day were filled with significant life trials, shaping each woman into someone slightly different and a bit stronger. Top to Bottom shares the final stage of each female’s development; both taking that final step to heal and love.

Amie’s wild and crazy ways condemned her to homelessness when her family discovered her kissing another girl. With all of her college friends gone, Amie struggled until she found her first job. Understanding the hardship and humiliation of living on the streets, and the pain of loneliness after being cast out by her family, Amie doesn’t trust easily. Dru gives her balance and a safe place to share herself. While I found the falling (back) into love part a bit too easy, or rather than it felt like it happened under the radar, it was still believable because of the pair’s dynamic when we did see them together, opening up and therefore, growing. Dru pushes Amie with just the right amount of determination, until Amie realizes she can trust again.

Meanwhile, Dru has lived a pretty good life, until she lost her partner. Opening the club was their dream, and Dru is determined to make it work. However, someone is out to ruin her and/or her club, and giving up may be the easier option. At times I felt like Dru saw Amie as a case to manage – something broken to be fixed – and that’s what drove the relationship. However, it was done because she cared, and she was ready to move on with her life. Dru saw past Amie’s hard shell and wanted to expose the potential within.

My Rating: B- Liked It

Drusilla Stasevich wants to leave the past behind and start the next chapter of her life. Returning to her hometown to open her dream kink club, Escape, seems like the perfect solution. But it can be tricky making dreams come true—especially when the person you want to share them with isn’t around anymore.

Amie Templeton is no stranger to tough times. She’s learned to make it on her own, and doesn’t do relationships outside the kink world. When her ex Dru moves back to town, old feelings surface. But that’s fine, right, since Dru has just opened the hottest new kink club in town?

Dru and Amie want to get the distracting spark between them out of their systems. Instead, their intense play sessions fan that spark into a flame. As if Dru didn’t have enough on her plate, an anonymous saboteur threatens to push her new club out of business. It will take the help of everybody at Escape to set things right again, and a lot of trust for Dru and Amie to start working toward a new life together.

Reviews in the Series:
The Unicorn by Delphine Dryden (Escape #2)

Delphine Dryden  probably should have gone ahead and  become an English professor like she planned. Instead, she took a detour through law school, another detour through the wonderful world of working in special education, and took an extra fifteen years to end up where she belonged: writing kinky romances.

Del’s writing has earned an Award of Excellence and Reviewers’ Choice Award from Romantic Times Book Reviews, an EPIC Award, and a Colorado Romance Writers’ Award of Excellence.  When not writing or editing, she can be found binge-watching television shows with her girlfriend, playing tabletop games, and tweeting to excess.

To celebrate the release of Top to Bottom, one lucky person will win an ebook package of Dom Around the Corner and The Unicorn, plus a $5 Amazon gift certificate. Leave a comment with your contact info to enter the contest. Entries close at midnight, Eastern time, on July 23, 2016. Contest is NOT restricted to U.S. entries. Thanks for following the tour, and don’t forget to leave your contact info.

For the duration of the tour, Del is also giving away paperback copies of her steampunk books Scarlet Devices and Gilded Lily. Contact her via her website’s contact page, put your favorite mythical beast in the subject line and your name and address in the body. Limit to 20 people total, or until the tour ends.

These giveaways are sponsored by the publisher and author. Open to participants who are legally allowed to participate in such a contest as allowed by their local laws. All federal, state, local, and municipal laws and regulations apply. Void where prohibited. No purchase necessary. By participating in the contest, participants agree to be bound by the decisions of the contest sponsor. Prize will be delivered by the contest sponsors. This blog, its reviewers, and the owner are not responsible for items lost in the mail. By entering this giveaway, participants agree to abide by these terms.

7 responses to “Review + Giveaway: Top to Bottom by Delphine Dryden”